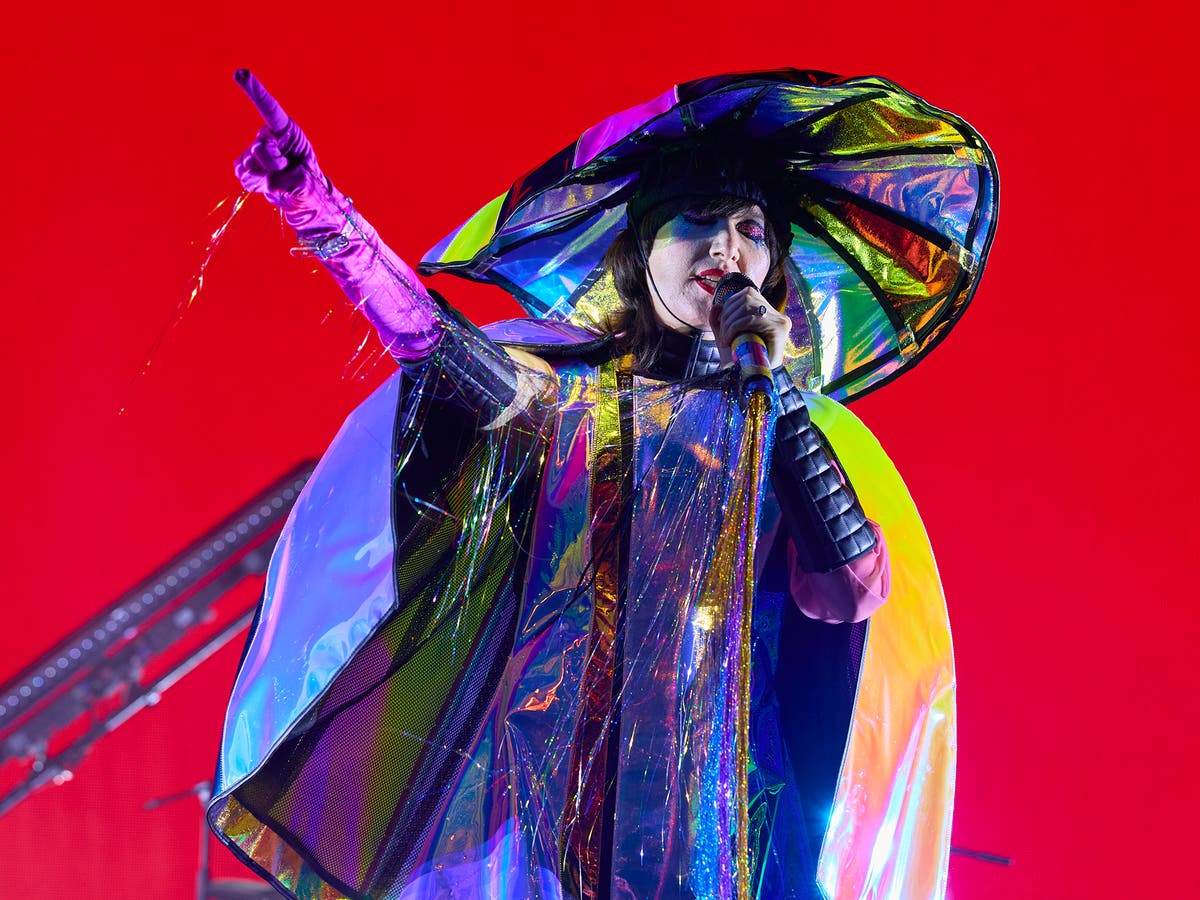 In a sci-fi neon temple, the high priestess of indie sleaze – dressed like all street quality at once – throws down her glowing rainbow cowl, spits water 10 feet in the air like a human geyser, raises a microphone with a unicorn tail high and shouts, in a hearty rock-chick howl, “The Yeah Yeah Yeahs are back!”

And not a moment too soon. Ever since singer and future fashion icon Karen O first hopped onto a stage gulping down a mic while drunk on champagne, the Yeah Yeah Yeahs have been among the brightest, most colorful and captivating live bands in history. the planet. These three frontmen of the New York indie-rock explosion of 2001 return for their first London gig in four years (their first album in nine years, cool it down, is on the way), just as their cultural motto hits a resurgent high. Lizzy Goodman’s famous oral history of the early 2000s New York rock community, Meet me in the bathroom, is slated for a sister documentary. The internet is abuzz with talk of “indie sleaze,” a new name for an old scene that’s tuned into the next generation of lusty alt-poppers like Wet Leg, Confidence Man, and Jockstrap. Two decades later, at 43, Karen O is once again a queen of the avant-garde scene.

Tonight, the Yeah Yeah Yeahs, chronologically and stylistically, recede in our affections. They open with their latest single “Spitting Off the Edge of the World”, a cataclysm of synthwave ballads that highlights their impact on – and affinity with – the most modern synth sounds (hence the appearance as guest of Perfume Genius). Then Karen – twirling on the spot in her iridescent dress like a Pride whirling dervish – glides breathlessly into “Cheated Hearts,” a glorious example of the band’s mid-2000s evolution into a thrilling mesh of fury and fragility. Nick Zinner’s searing guitar riffs amid the song’s heartbeat, doe-eyed poetry makes the chorus sound like Karen has wandered into the middle of a highway in a love-struck daze. That gives way to “Pin,” an urgent smash from the debut album that suggests The Yeah Yeah Yeahs have captured New York’s crosstown rush and post-punk cool even better than The Strokes.

With history restored, the trio set about charting the sophisticated territory they have explored over the past decade. “Under the Earth,” from 2013, is a primal, underground siren song accompanied by visuals of fire and flesh. The Motown cutscene for the new track “Burning” is proof that they have a pretty funky Bond theme to them. Another new song, “Wolf,” hints at explosive gothic synth direction for cool it down, but retains the core band dynamic, where romantic restraint and barbed savagery perfectly co-exist – the sonic equivalent of a blissful S&M marriage. It’s there in “Soft Shock,” the quintessential indie sleaze anthem “Gold Lion,” and even their signature song, “Maps,” one of the greatest love songs ever written. Karen’s heartfelt pleas for her partner to “wait, they don’t love you like I love you” stagger, tear-strewn, into Zinner’s monster truck solo.

As giant inflatable eyeballs bounce around the crowd during the pop rave anthem “Zero,” “Y Control” goes through in a locomotive explosion and Karen, now dressed as a post-apocalyptic Pan person, ends “Date With the Night” by repeatedly smashing his microphone on stage in a torrent of confetti. The return of Yeah Yeah Yeahs acts as a hard lesson for the mobile pop generation. All the futuristic noises in the world are nothing without melody, excitement, punch and spectacle. As always, the Yeah Yeah Yeahs live experience lives up to its name.