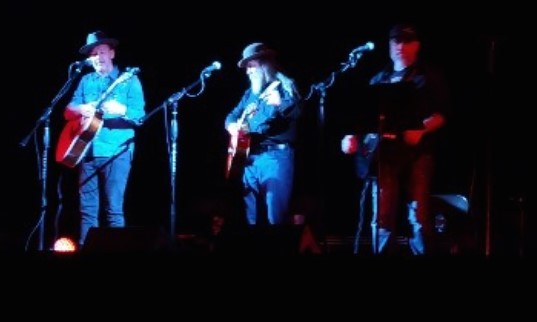 A few hours after dark, three singer-songwriter guitarists played their songs under the lights of the Klipsch auditorium to a nearly full audience.

Their distinctive writing styles were clearly apparent, with Dave Almond, the most veteran performer, playing and singing his cuts of country blues that spoke of breaking loose near hayfields, Trey Johnson playing the role of a passionate troubadour and pleasant with jokes in his lyrics and Jason Helms plumbs the depths of amorous despair and plays solos throughout his music and that of his stage mates that evoke the feelings that gallop across the distances between the heart, the body and brain.

A lovely playing happened as the performers accompanied themselves on three guitars that echoed through the theater like the commentary of choirs from beyond on earnest singers’ descriptions of visits savored or not, romances ended or no, second chances offered and don’t.

Applause from those seated was frequent, as was their laughter, with each musician introducing most of the tunes with a faithfully described, sometimes self-deprecating, story of their origins. When the music ended just after 9:00 p.m., the crowd stood up and cheered as one.