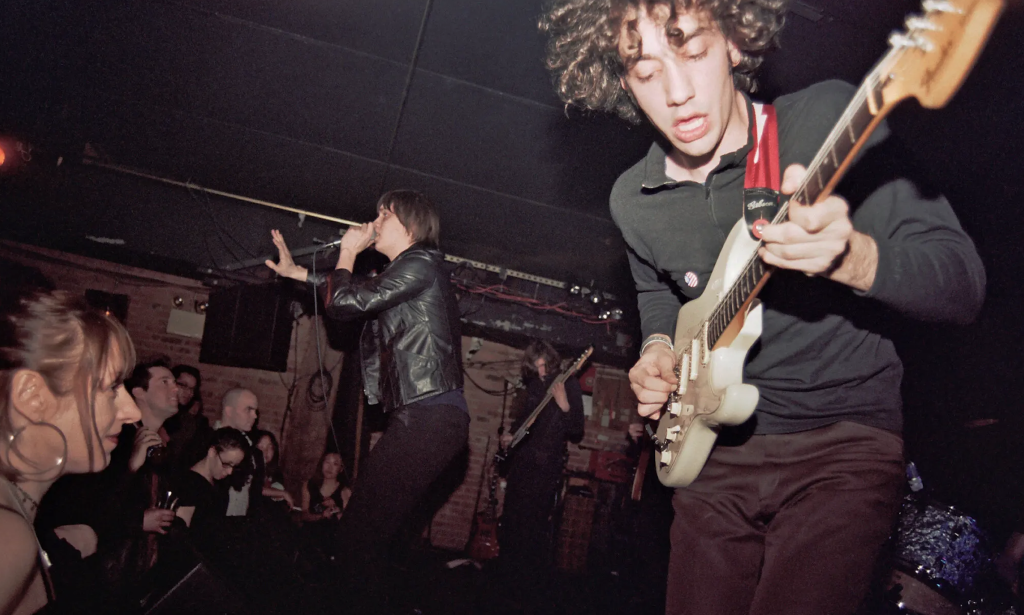 The Strokes are one of the bands featured in the Dylan Southern and Will Lovelace documentary Meet me in the bathroom. // Photo courtesy Rebecca Greenfield/Utopia/Showtime/Vice

Born out of grime, crime and big moments, the indie rock scene of the early 2000s was the breeding ground for the musical touchstones of a generation. Now, that time of sparks and edges is forever captured and celebrated in a new documentary from filmmakers Dylan Southern and Will Lovelace.

Meet me in the bathroom documents the rise (and occasional fall) of musicians and bands that appeared on a whim overnight in Brooklyn or Williamsburg, then spread around the world like a cultural pandemic.

The film works off of period footage that freezes bands like The Strokes, The Rapture and Interpol in their earliest forms. The interviews, show footage and, of course, the audio recordings all come from the period between 1999 and the mid-2000s, as captured by those who were there, with little modern reflection on the moments within. . It is a documentation of a time and a place, with a love for the place and a respect for the time.

Framed largely by the perspective of The Moldy Peaches, the film begins by capturing the lives of dirt-poor rockers making indie recordings in a time when New York was akin to Seattle in the 90s. The Strokes begin to conquer the world, and everyone on the local scene, whether by choice or proximity, is beginning to rise with them.

For fans of the post-rock indie hits of Liars and TV on the Radio, it’s a delightful trip down memory lane, with some incredibly great recordings of early shows. The interviews themselves are sometimes scattered, but that’s what you’d expect from rock stars when they’re in pre-media training…and often screwed up, as the title suggests.

A few major themes permeate the documentary, including a message about shooting. Many of the bands featured seem to have self-funded (or outright screwed up) to access the opportunities that launched their careers. Karen O of the Yeah Yeah Yeahs in particular drunkenly bragged about her band to the right person at a house party, and ended up with a first gig opening in New York for The White Stripes. James Murphy’s debut gig for LCD Soundsystem ends with a gig in the UK with a band of drinking buddies, where Murphy’s biggest concern as a rookie frontman is that he won’t quite know what to do with his hands on stage.

A major incident prompting this push from the cliff edge stems from the city’s most disastrous event. 1999 and 2000 saw these musicians partying and living high on an artistic dream. Then there is 9/11. In the aftermath, many of the featured players have dedicated their entire lives to trying to achieve the rock star’s dream, because what if you die tomorrow? The spirit of total devotion as a response to trauma pushes many of these players into a ride-or-death contract with a lifestyle, yielding extremely joyous and/or catastrophic results.

Meet me in the bathroom plays one night only at KC—tonight at Screenland Armor. It’s coming to streaming later this month.