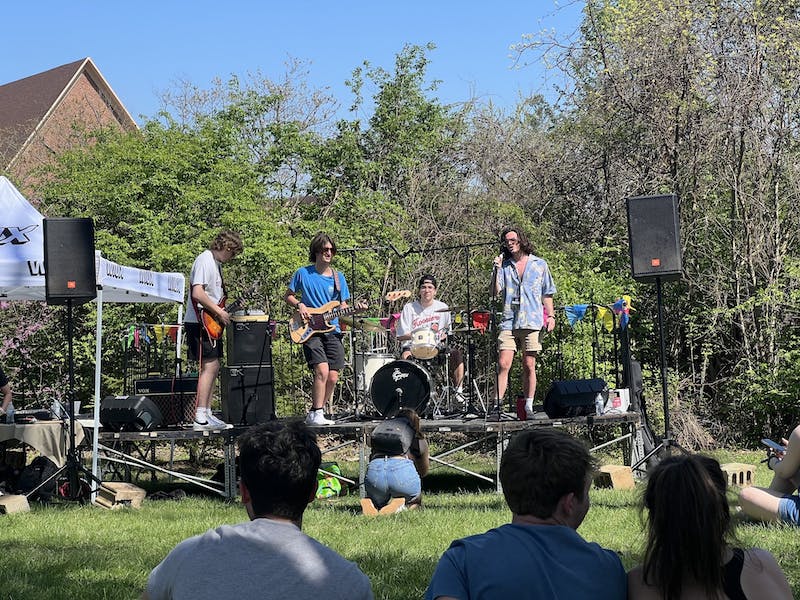 About twenty artists performed on three stages, one in a backyard and two in basements.

The Whiles, a local band, brought funk and rock to the backyard scene, playing Stevie Wonder’s “Superstition”, The Who’s “My Generation”, Talking Heads’ “Psycho Killer”, “Santeria by Sublime, “Light My Fire” by The Doors, and “Dear Mr. Fantasy” by Traffic. They also played their first unreleased original that they wrote that morning.

In the basement of the house, known as The Reef, Class Action played the originals “All I Need” and “Sunday Afternoon” while surrounded by a selection of psychedelic tapestries that covered every inch of the walls. with people taking up the whole room.

“I hope you all like fucking jam,” Nouri told the crowd before Holumb played an unreleased original song, “Sunrise.”

As Westhead closed the backyard show, the crowd got up off the ground and swung their arms back and forth.

A slide welcomed people going to the festival and other garden games were available. Attendees played cornhole and board games. Karaoke was available in the garage.

WIUX provided a DJ set from 2 p.m. to 4 p.m. during the intermission. WIUX also had a table to sell merchandise and hold a vinyl record giveaway.

“I’m naturally inclined to make art, and I have a lot of it, so I like to sell it,” Davis said.

“I feel like (Bloomington) is a really good community,” Prager said. “There are a lot of people who really honor the arts and it’s really great to get back into the art and find other people who are as interested in it as I am.”

Alexa Dow, president of Undergraduate Student Arts Managers and senior IU, was selling art at a table. She said the profits were split equally between the Ukraine Crisis Fund and the Civil Disobedience Movement in Myanmar.

The festival was named “Burning Couch Festival” to honor their first house show, during which a couch was thrown into a bonfire. In memory of this festival, a sofa was burned in a bonfire at the end of the night.