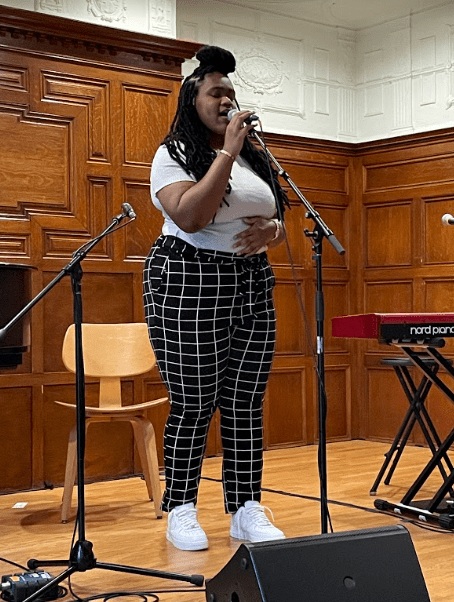 The Webster University Songwriting Masterclass had its first showcase of the year on Friday, September 2.

The showcase featured original music from the masterclass students. Some of the song titles include “Tattoos Don’t Wash Away” by Cam Burns and “Never See You Again” by Jack Harre. The audio students provided the equipment for the performers.

Bishop also wants students to feel like their time was well spent and that this program is still going strong.

The idea for “Songs on the Patio” came from sophomore Cam Burns, who also performed at the event. Burns performed three original songs: “Tattoos don’t Wash Away”, “Waking Dream”, and “Loving Ghost”. Burns said the one thing he wanted the audience to take away from his performance was the energy in the room.

“I want everyone to connect with the song in a different way,” Burns said. “The vibe is much less formal and more communal.”

The inspiration behind “Songs on the Patio” came from Webster alum Rachel Deschaine. Deschaine gave a senior recital on the patio behind the Thompson Music House, and Burns suggested to Bishop that would be a great venue.

Not all music department courses are open to all students, but the Songwriting Masterclass is. For example, Katie Klein is a sophomore majoring in psychology. Klein sang and accompanied herself on the keyboard.

“It’s personal to me, it’s our own music, we write it ourselves, and it’s completely original,” Klein said. “Music can bring people together, and it’s fun to play and watch your friends play and cheer them on.”

Harre debuted with music from an album released on Spotify under the stage name JXO. He started writing at age 14 and continues to write in college.

As the performers sang, more and more students crowded into the recital hall of the Thompson Music House. The room filled up so quickly that students peeked through the doors to catch a glimpse of their classmates.

At the end of the show, Bishop mentioned how lucky she was to work with these students, many of whom are just starting their college careers. For those who missed that performance, there’s another showcase November 4 at Blue Strawberry, a concert venue at 364 N Boyle Ave. in St. Louis.

Other student ensemble recitals this semester include Choral Ensembles on December 7 and 9, Webster Orchestra on October 2 and November 13, Wind Ensemble on October 10 and December 5, Jazz Combos on November 7, Jazz Collective on November 14, Webster University Jazz Singers on November 21 and another event for student composers on October 30.