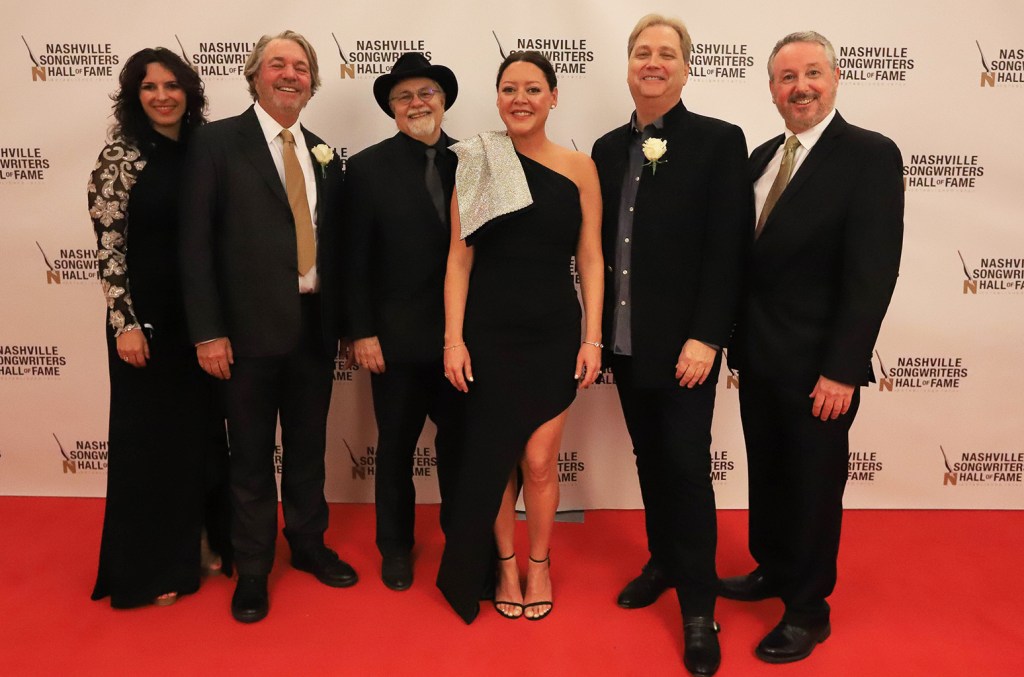 “It takes a village”, songwriter Hillary Lindseyone of the 2022 inductees into the Nashville Songwriters Hall of Fame, told the audience gathered for the organization’s 52nd anniversary gala Sunday night (October 30) at the Music City Center in Nashville.

Indeed, even as the much-vaunted Hall of Fame added six new inductees to its exclusive institution, nearly every inductee throughout the evening made a point of thanking the co-writers, editors, artists, musicians, engineers, producers , record labels and others within the music industry ecosystem who help turn their lyrics and melodies into hit records – and many of those from the winners’ music villages were among the 1,150 attendees that night. .

Lindsey accepted her honor with humility. “When [Nashville Songwriters Hall of Fame executive director] Mark Ford called to tell me this was happening, I couldn’t believe what I was hearing and my first thought was, ‘Somebody clearly got it wrong here,'” she said . She thanked her college roommates for returning the tapes she recorded of her songs to city publishers, which led to her first publishing deal. She thanked many of the writers and editors she worked with on her journey, including Troy Verges, Brett James, Gordie Sampson, Blair Daly, Aimee Mayo, Shane Stevens, Chris Lindsey, Luke Laird, Kos Weaver and many more. others for “your dear friendship”. I love you so much” and “for believing and starting these songs.” She also thanked her “Love Junkies” co-writers, Lori McKenna and Liz Rose, saying, “I love you all for more reasons than I can count.”

To all of her fellow songwriters in the room, she said, “You’re the ones that hold the pulse of this town,” she said, “and I’m more than lucky to be a part of it.”

Gary Nicholson was inducted into the same category, known for writing songs recorded by Don Williams (“That’s The Thing About Love”), Charley Pride (“The Power of Love”), Waylon Jennings (“Working Without a Net”) and Montgomery Gentry (“She Couldn’t Change Me”), among others.

Nicholson accepted his honor saying, “Over the years in Nashville, I always hoped for an opportunity for me to stand before my friends and offer my sincere thanks to Jim Ed Norman, who brought me in Nashville in 1980.” In 1983, he signed with Tree Publishing (now Sony), along with several of his hero composers.

“Harlan Howard used to say, ‘If you want a Cadillac, write yourself a Cadillac. If you want a pool, write yourself a pool,'” Nicholson recalled. Walter Campbell was my main vocalist in those years. Tree demo musicians played on most records. I want to thank all the musicians and engineers who made my songs sound like they belonged on those records. I also want to thank all the artists and producers who have chosen my songs over the years…Here are all my friends who have shared their talent with me over the years.

Shania Twainwho wrote many of his own hits, placing 22 of the top 20 self-penned songs on the Billboard winners (including seven leaders), was inducted in the author-composer-contemporary artist category. Twain’s pop-country mainstays include “You’re Still the One”, “Come On Over”, “No One Needs to Know”, “Man! I Feel Like a Woman!” and “From this moment”. Twain was not present, but she sent in a video acceptance speech, calling the songwriting a “saving grace” and thanking members of the Nashville community for their support.

David Malloy was inducted into the veteran songwriter category. Malloy is known for collaborating with Eddie Rabbitt and Even Stevens on several hits recorded by Rabbitt, including “Drivin’ My Life Away”, “I Love a Rainy Night”, “Step by Step” and “Gone Too Far”. Another Rabbitt hit, “Suspicions”, was named Country Song of the Year by BMI in 1980, and was also a hit for Tim McGraw in 2008. “Love Will Turn You Around”, recorded by Kenny Rogers, was was named ASCAP’s Country Song of the Year in 1983. . Malloy and Stevens also teamed up to launch Emerald Sound Studio together in 1981. Malloy also credited his father, sound engineer Jim Malloy, who produced “Help Me Make It Through The Night” and worked with artists such than Johnny Cash and Elvis Presley.

“I’ve heard so many great songs from great songwriters all my life and it’s been an incredible joy to be around so many super talented people and then have the pleasure of working with them,” Malloy said. “I am a co-writer and record producer. I produced all the songs I’m here for tonight, it was my thing that I did.

Respected author, journalist, historian and Nashville Songwriters Hall of Fame Board Member Robert K. Oermann presented the Hall of Fame honor to the late Moman Chips, who was inducted into the Nashville Songwriters Hall of Fame’s new legacy category, which is designed to honor deceased songwriters worthy of the Hall of Fame. Moman, who died in 2016, had his songs recorded by Willie Nelson, Dionne Warwick, Brenda Lee, Elvis Presley, Gram Parsons, Elvis Costello, Johnny Cash and many more. He scored R&B and pop hits in the 1960s with James Carr’s “The Dark End of the Street” and Aretha Franklin’s “Do Right Woman, Do Right Man”. He won a Grammy in 1976 for Best Country Song for BJ Thomas’ recording “(Hey, Won’t You Play) Another Somebody Done Somebody Wrong Song”). Moman also wrote the Waylon Jennings classic “Luckenbach, Texas (Back to Basics of Love)”, David Houston’s “Love Looks Good on You” and George Strait’s “So Much Like My Dad”. Moman’s wife and children accepted the honor on his behalf.

Steve Wariner was inducted into the veteran songwriter category. In addition to his highly acclaimed vocal and guitar prowess, Wariner has also authored his own songs, including “Two Teardrops”, “Holes in the Floor of Heaven” (which was also named 1998 CMA Song and Single of the Year) . as 1998 ACM Song of the Year) and “Baby I’m Yours”, as well as hits made popular by Clint Black (“Nothin’ but The Taillights”), Keith Urban (“Where the Blacktop Ends”) and “Longneck Bottle,” a duet Wariner recorded with Garth Brooks.

“I’m truly honored and touched tonight,” Wariner said, thanking his wife Caryn (who also publishes his music) for her influence and support. He also recounted key moments in his career, including going on the road with Dottie West while still in high school and remembering her encouragement for his writing. He recalled “Mr. Guitar” Chet Atkins signed him to RCA and while they were recording a record, Wariner started playing bass and touring with Atkins (“The guitar job got taken from that band he joked).

“I’m looking at so many songwriters here who are my heroes, that I grew up wanting to be a part of them, wanting your approval,” Wariner noted. “Bill Anderson spoke so eloquently a moment ago…the way you guys and girls put the words together and write, I’ve always wanted to be accepted into your club and I feel like I am finally maybe here tonight. It’s so special. He also thanked all of his co-writers. “Thank you so much for supporting me and as Hillary said so beautifully, no one does it alone.”

The evening also included a moment of remembrance for two recently deceased members of the Nashville Songwriters Hall of Fame, Loretta Lynn (inducted in 1983) and Dallas Frazier (inducted in 1976). Jon Randall performed Frazier’s “If My Heart Had Windows,” while Jessi Alexander took the lead in a pitch-perfect rendition of Lynn’s “Coal Miner’s Daughter.”

Throughout the evening, the writers were celebrated by several artists. The Isaacs honored Twain with renditions of “Forever and For Always” and his Grammy-winning song “You’re Still the One.” Underwood and Urban took the stage together for a rendition of Underwood’s “Jesus, Take The Wheel” (with Urban backing Underwood on guitar) and Urban’s “Blue Ain’t Your Color” (with Underwood providing harmonies) . Rhett Akins performed a rendition of his 1998 recording of “Drivin’ My Life Away”. Vince Gill celebrated Nicholson by taking the stage with Delbert McClinton, Shawn Camp and Michael Rhodes for a performance of “One More Last Chance.” Clint Black performed “Luckenbach, Texas (Back to the Basics of Love)” written by Moman. Meanwhile, Brooks closed the night’s performances with an acoustic performance of “Holes in the Floor of Heaven” by Wariner.