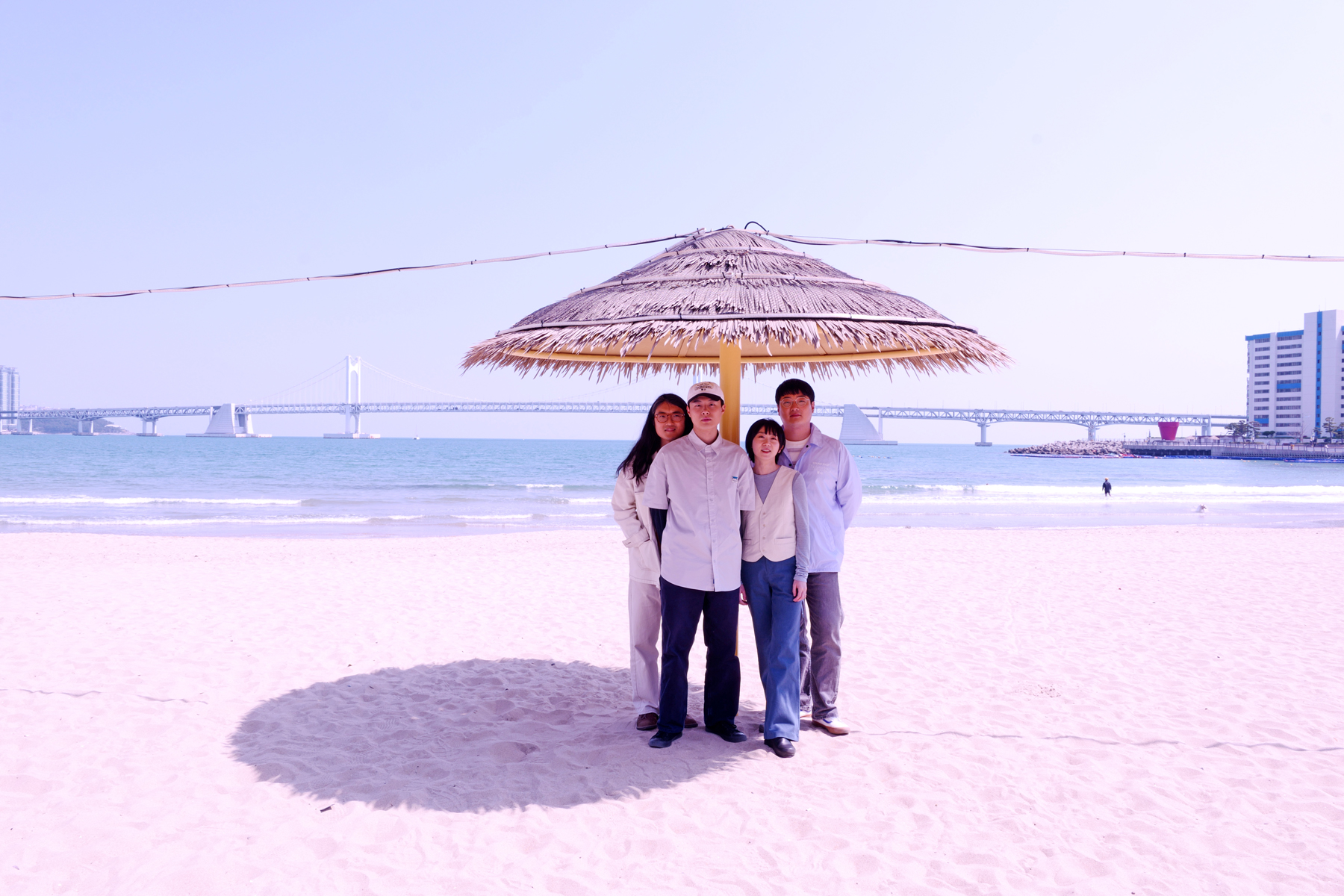 Sumi Choi’s origin story begins quietly. “I could barely speak when I was four,” she says. “But I did sing, and I will sing this very sad song. I was a sad child. There’s a pleasant candor that pervades a conversation with Choi, 34, and the rest of Busan, South Korea-based quartet Say Sue Me. Even through Zoom, and with the help of an interpreter, he is evident that the comfortable surf rock that has brought them an international following is rooted in their attractive, laid-back attitudes.

Choi discovered the music of guitarist and songwriter Byungkyu Kim, drummer Semin Kang and bassist Jaeyoung Ha ten years ago in his mid-twenties. “I was a huge fan of them,” she recalls. “One day they asked me if I wanted to be their singer, I accepted.” It was perfect: Shortly after Choi joined the band as a vocalist and guitarist, Kim says, “it became easier to make music.” In the years since, Say Sue Me has released two studio albums, with 2018 where we were together taking them far beyond the borders of their small independent scene.

On their third album, The last thing left (released May 13), the group – which now consists of Kim, 37; Choi; drummer Sungwan Lim, 34; and bassist Jaeyoung Kim, 25, continue to hone their unassuming rock music, adding a more nuanced emotional charge to their songs than ever before. “The feelings for this album run inexplicably deep,” Choi says. “We’ve always been sincere, and we can’t compare the depth with the previous album, but the difference is that we kind of know what we’re doing, and we want to provide light energy rather than sadness and complaints. … It’s not easy, but we tried to do it.

These 10 songs have a distinct lived quality. Even the instrumental opener, “The Memory of the Time,” has the aura of opening a beer after a long, hard day: warm, well-deserved comfort. It’s no surprise that such patient and evocative music comes from such a tight-knit band. Asked what they like about each other, Jaeyoung Kim says Choi “really cares about people,” while Lim appreciates the “youthful energy” Jaeyoung brings to the group. Choi notes that her band members are all good listeners: “Not being talkative is a good thing,” she laughs. Joyful hand drum “We Look Alike” finds Choi reminiscing about a lover (“When I’m feeling sad/you’re quiet, just listen to me”) to telegraph how simple actions can lead to a symbiotic relationship.

This kind of eternal love – of self and others, romantic or not – is the underlying theme of The last thing left. “When I was troubled by the inexplicably complex feelings about myself and relationships with others,” Choi says, “I felt better when I had only one important thing on my mind. put all the negatives aside and [saw] what [was] left at the end: This is love.

Naturally, Choi’s words hit the hardest when she’s fully aware of herself. “Why am I doubting everything just to be me? she sings on “Still Here,” a track whose rambling beat and doo-wop-ish melodies echo Yo La Tengo in their most melancholic and straightforward form. The most upbeat songs also contain small revelations. On the jangly “Around You,” Choi is frustrated and static, feeling the weight of growing old while spending so much of her life in her bedroom. “I’ll be better off when I’m near you,” she says. The cheerfulness and warm harmonies of the song are strange in the atmosphere they evoke: they sound like an endearing friend who wants to cheer you up, emphatically but with compassion.

The last thing left ends on a high note with “George & Janice”, a song that served as a wedding present for the couple who run the band’s UK-based label, Damnably. Byungkyu Kim details the origins of the song: “We were on a European tour, and when we were in Spain, George and Janice came to tell us that they were getting married. After hearing this, Kim immediately found a piano melody in her head, and it became the basis of their love song. Particularly, The last thing left is the first album Say Sue Me released after leaving her Korean label, Electric Muse. “We made this album by ourselves,” Lim says. Choi goes further: “Everything was done with our own intentions.”

Such a need for infinity makes sense for a band that has never been tied to mainstream musical trends in its home country. Since Say Sue Me is not based in Seoul – the capital, where Byungkyu Kim says “everything is concentrated” – they are far removed from the biggest pop stars and underground groups in their country. They also don’t work in the mold of the Korean indie bands of the past three decades. “We listen to a lot of American indie rock music and we wanted to be like them,” Choi said. Kim then adds an adorable sentiment: “Everything in Korea is centered around Seoul, but we were born in Busan and we never left. We can find meaning here. By staying true to themselves, they forged their own sound within their own stage.

When Say Sue Me talks about Busan, they mostly focus on the people. They point out that Seoul is too densely populated for them and wince at its claustrophobic atmosphere. Specifically, the people of Busan share a specific quality that stands out. “They’re really honest,” Choi says. “Sometimes it’s mean, but it’s honest. I like that kind of personality.

This may partly explain why his words are so candid. The hardest song for Choi to write was “Photo of You,” which came after original bassist Jaeyoung Ha left the group — the other band members prefer not to go into details. She notes that the song wasn’t explicitly about him or about him, but about loss and the horror of broken relationships. With ladylike decorum and Brill Building-like drums, Choi sings in a dark tone, “I don’t wanna get used to this feeling / I know every day isn’t for getting ready to say goodbye.”

A sense of true camaraderie is at the heart of Say Sue Me. That’s why Byungkyu Kim finds the songwriting process so difficult: even when he receives input from others, it’s ultimately a lonely process. “But when we get together and record,” he says, “that’s when it’s fun.”

When Say Sue Me practices, they do so at a space near Gwangalli Beach in Busan. If you stand on its crescent-shaped cove, you will be mesmerized by the crystal clear waters lapping on the shore. In the distance, one can see the Gwangan Bridge – four miles of road linking the districts of Suyeong and Haeundae – a sight that drowns out the sense of vast expanse that the East Sea otherwise offers. Turn around and you will see towering skyscrapers, restaurants, bars, hotels.

It is in this humble space, filled with a simultaneous sense of confinement and freedom, that listeners can get a sense of the spirit of Say Sue Me. With every sense of calm, there is a melancholy beneath -lying. This thought is echoed in Choi’s explanation of why she sings mostly in English: “It’s easier to share my feelings, because then I can’t feel the feeling well.”

When Choi finally sings in Korean on “The Dream,” with lyrics about feeling alive, the economical arrangement and tenderness of the guitar solo feels like a sweet moment of respite. The song ends with a crossfade, as if they never wanted this moment to end. This brings to mind the one reason why all the members of Say Sue Me agree that they stayed in Busan all this time: “Everyone we love is here.”