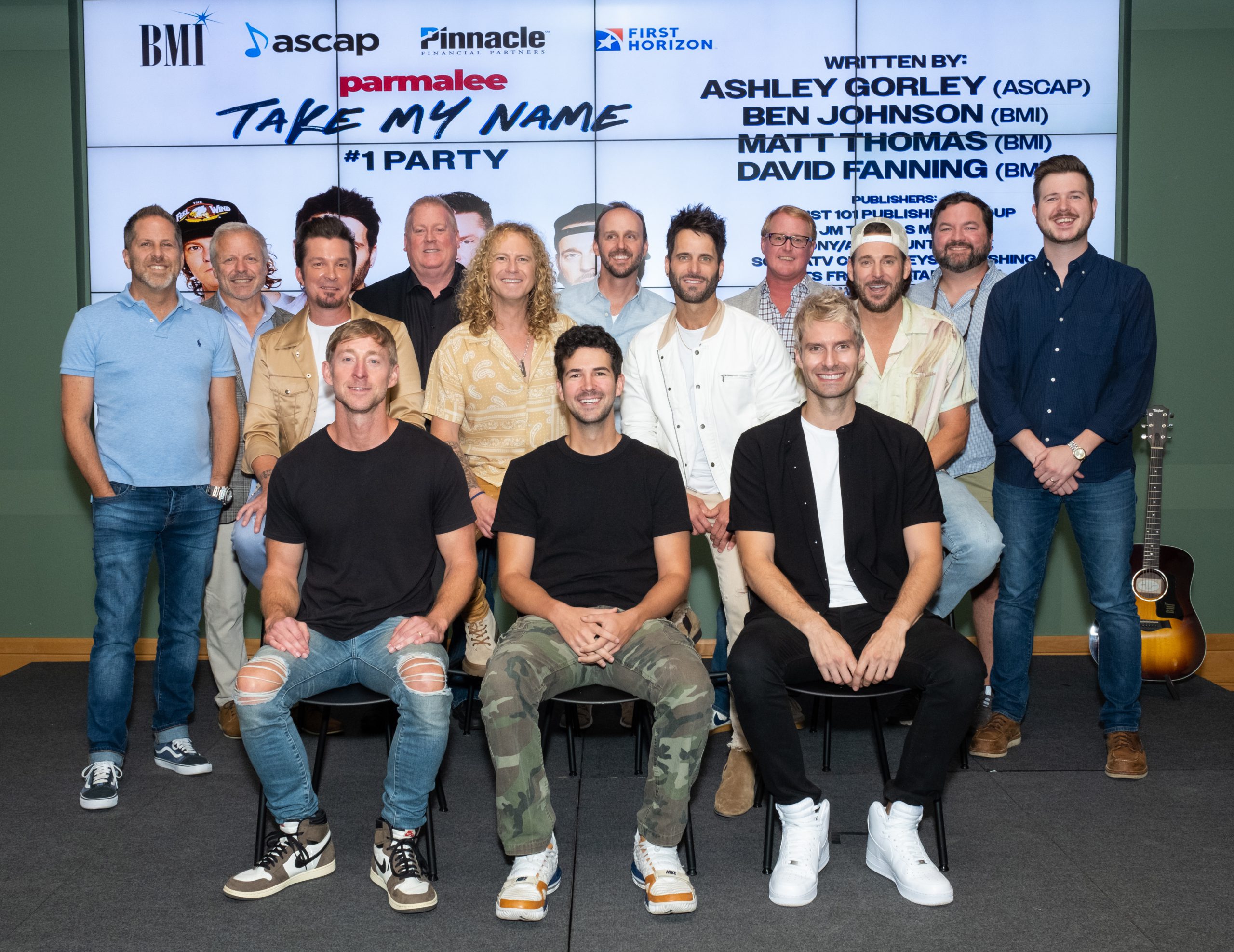 On Tuesday afternoon (August 23), members of the industry gathered at BMI to celebrate Parmaledhit “Take My Name”.

The atmosphere inside was as warm and sunny as it was outside in the summer heat as everyone gathered around the tall black tables dotted throughout the room. BMI Josh Tomlinson took the stage to host and called on the Stoney Creek recording group and songwriters to join him.

Tomlinson began by congratulating the editors of IMC Ben Johnson, David Fanningand group member thomas thomas. “I feel like this song is probably the soundtrack to a lot of memories from couples around the world,” he said. BMI’s creative director then presented the Mike Sistadwhich welcomed the CEO of ASCAP Beth Matthews and songwriter and owner of Tape Room Music Ashley Gorley for its success “on a level never seen before.” Sistad added, “Ashley, we are proud to have you part of the ASCAP family. Thank you so much for being a part of us and congratulations on another #1.”

The wedding song written on a snowy day marks Gorley’s 62nd No. 1 hit and his first No. 1 with Sony Music Publishing. 8 times ASCAP Songwriter of the Year and 4 times Billboard The Country Songwriter of the Year will be recognized as Songwriter of the Decade by NSAI in the coming weeks. Towards the end of the event, Fanning reiterated his co-writer’s talent by sharing the voice recording Gorley sent him while the snow was falling in which he shares the idea for the song and sings part of the chorus. .

The next step was Blain Rhodes by Tape Room Music. Beer in hand, he marveled at how “this band and [BBR] come out smash after smash. Rhodes drew everyone’s attention to the fact that Johnson isn’t even 30 and has already achieved so much in his career, noting his seven national No. 1s; awards for BMI, ASCAP and SESAC Song of the Year; and his Grammy nomination for Rock Song of the Year. The Track45 band member is also a producer and has worked with artists such as Kylie Morgan and Hunter Phelps. 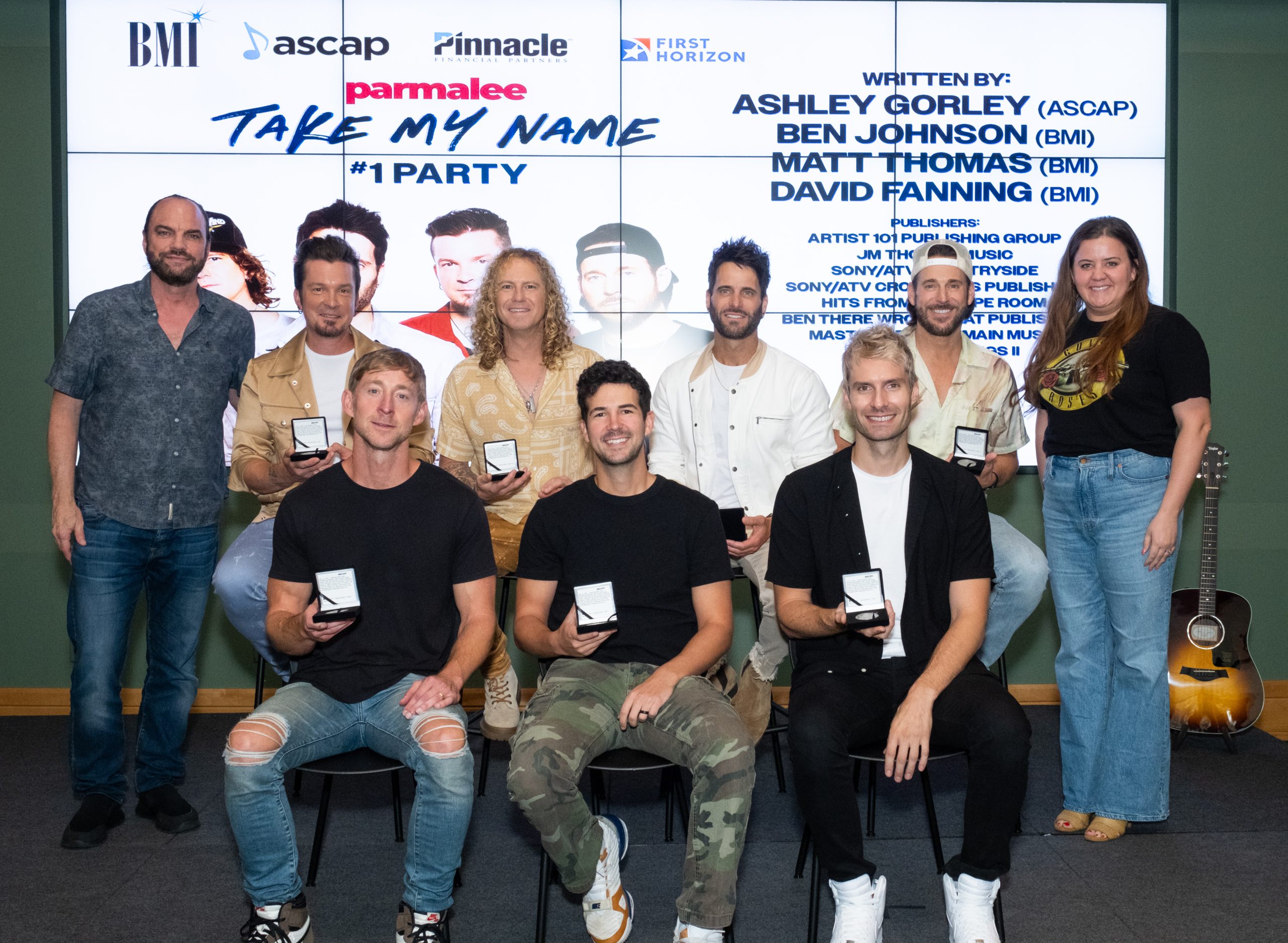 Sony Music Publishing Gaston Rusty was on deck to talk next. “It’s an exciting time for country music and a wildly exciting time for the Parmalee band,” Gaston said. “What I love most about the music industry, and working with songwriters in general, is the fact that we get a front row seat to watch dreamers go to work, and then see those dreams come alive. We’re all seeing Matt Thomas’ dream come true right now.

Gaston noted that, like many artists, Parmalee’s journey hasn’t been easy, “but Matt and the guys in his band never lost heart.” He praised BBR Jon Loba and JoJamie Hahr for their success and also paid tribute to Sony Music Publishing Tom Luteran33 Creatives Tina Crawfordand Fanning for supporting the band from the start.

“This is the first #1 night I’ve had to speak at, and I can’t believe I have to follow Rusty Gaston,” joked lindsay goes music from Round Hill. She sang her praises to the songwriters, noting that in lieu of a plaque, Round Hill Music would donate to the My Life Speaks foundation in Gorley’s name.

tank John Ozier stated that “everything about the song was perfect”. Ozier congratulated Fanning on his first No. 1 as a songwriter and reminded everyone that he also co-wrote and produced Parmalee’s debut single “Musta Had a Good Time” in 2012. He also recognized Crawford and the risk she took on the group, as well as Reservoir’s VP of Creation Greg Gallo and the significant role he played in bringing Fanning to Reservoir.

Jim Lander from Pinnacle Bank remembered the group’s success celebration “Carolina” in 2014 and congratulated them on their achievement. Landers announced that in lieu of the plaque, Pinnacle Bank donated to St. Jude Children’s Research Hospital.

Loba then intervened to talk about the future of the group. “If these guys aren’t nominated for Group of the Year at the CMAs and ACMs, it’s going to be criminal,” the label’s president said.

Gorley followed up and thanked his co-authors, editors and ASCAP. He also thanked God, his family and the crowd for coming. Gorley commented on how “Take My Name” stayed in the top echelons of the chart nine weeks after hitting No. 1. “Thank you Stoney Creek. Everyone echoed that, but they’ve been here a lot lately. time because they work like crazy. They believe in these songs and they push them,” he said.

A long-awaited moment for the artist/producer/songwriter, Johnson took to the stage to share his excitement for his first No. 1 night and to applaud his co-writers, the Tape Room Music team and BMG.

“I’m pretty sure every editor in Nashville said ‘no’ to me at some point, and then Ashley said ‘yes’ to me and changed my life,” he shared. “It’s so special that not only is it with Tape Room, but it’s with BMG, who believed in me, my music and [Track45] two years ago. We’re also signed to Stoney Creek, so just another reason why I’m glad this is my first No. 1 night.” He concluded by thanking his wife Lauren, who is “more important to [him] than any #1 [he has] had never had”—his sisters who were unable to attend, and everyone involved in the project.

Finally, a moved Thomas took the microphone. The band leader said, “So many people here have been with us since day one, and it’s great to be standing on this stage right here 10 years later.” Thomas acknowledged the presence of his family in the audience and then thanked everyone who has accompanied Parmalee on their journey to success.

“We’ve been a band for a really long time and we’re all brothers,” a band member added. Barry Knox. He took the time to acknowledge all of Thomas’ hard work and let it be known how much the band appreciates him and his efforts.

Co-writer, Parmalee manager and producer Fanning recapped how the hit came about, sharing that the band agreed the song was “the coolest way to ask, ‘will you marry me?'” He said. told the crowd how proud he was to work with everyone at Stoney Creek, and drove it home by emphasizing Loba’s perspective on the CMA and ACM nomination. “The vote has arrived!” he said with a smile.

As project manager, Liza Anderson contributes to many MusicRow functions. She produces content, performs general office duties, assists with daily news operations and provides support to all team members. Liza graduated from the University of Alabama in May 2021 with a BA in English and a minor in Communication Studies. Prior to MusicRow, she worked as an administrative assistant at Anderson Benson where she assisted corporate departments, such as the entertainment specialist practice, with various tasks.