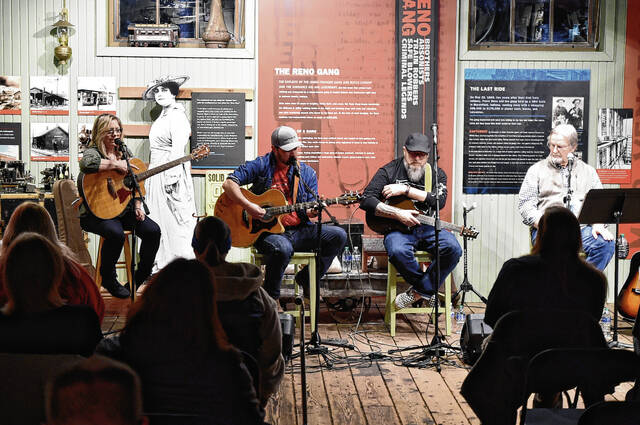 Harvey Adams was part of a cover band in high school that turned into a songwriting group that played heavy metal music.

Soloing acoustic music, however, has always been where his heart is.

A few years ago, Forrest Turner got serious about writing his own songs and mixed some of them with covers at gigs in the area.

Since then he has spent more time working on original music.

Franny Woodall started writing songs at the age of 18, moving from worship songs to secular songs. This then turned into a profession, where she played gigs and included her originals and many covers of her heroes growing up.

She discovered the love of creating her own music and being able to share it.

It was presented by Crossroads Entertainment Inc., the non-profit entity that hosts Crossroads Acoustic Fest at various locations in downtown Seymour, including the Visitor Center.

A fourth local songwriter, Justyn Underwood, was supposed to perform Thursday night, but learned earlier today that he had to quarantine for COVID-19-related reasons, so another local songwriter and event organizer, Joe Persinger, took over.

For Adams and Turner, this type of event was a new experience.

“A friend used to have a guitar night where we’d drink beer and sit around a table and take turns playing songs. It was covers. It was really great, a good workout and really fun, but we just played with people who walked into his garage,” Adams said. “(The Songwriters Showcase) is strictly just songs you wrote. To me, that’s the only reason I came.

He wanted to play original music and hear other people’s songs.

Having the ability to just play songs he wrote also meant a lot to Turner.

“It’s cool because it changes things up a bit because I’m used to doing so many covers than originals,” he said. “It really allows me to focus on improving the song and really focus on this song.”

He said he appreciated Persinger for asking him to be part of the showcase.

“I’ve never done anything like this, and I’ve been looking forward to it for a while. It happened too quickly,” he says, smiling. “I see a lot of guys that I admire musically on YouTube doing that when they were really nobody, so it’s kind of inspirational to see ‘OK, well, they were there once too. Why didn’t they? couldn’t I? That’s why I feel very privileged to do things like that because it’s also about trust.

Woodall was part of a similar show in 2018 hosted by the Crossroads music team at the Southern Indiana Center for the Arts in Seymour.

“The (Thursday) show was another breakthrough for me because of my shyness and stage fright, which was a big problem to overcome many years ago when I started performing in front of people,” she said. “But since COVID and life in general get in the way, playing in a listening room helps me realize that I can still do it. It boosted my confidence. »

She said she was grateful to have been asked to participate again and appreciates the encouragement from Persinger and Shawn Busby, who is also involved with Crossroads Entertainment Inc.

“We also had a great, responsive audience,” Woodall said. “It was a great audience, and it was great to be included with these talented musicians.”

His heavy metal band, Tod, was part of the Warped Tour that played Deer Creek Music Center in Noblesville in the early 2000s. He also played Indianapolis festivals and other events during a 10-year stint. .

During this time he also performed acoustic music solo.

“I discovered bands or people like Cat Stevens, Harry Chapin and Jim Croce. They’re all my heroes. They always told great stories and they all had that nasal voice, what my voice is kind of nasal,” did he declare.

Songwriting has benefited Adams, especially after he had a really bad panic attack several years ago.

“A lot of my songs are sad, and they have a sad connotation. I find happiness in sad songs. They make me feel better and calm me down,” he said. I was just writing a song, but it turns out I’m actually writing about my life. I want people to listen to the song and hear their story. I hope my song doesn’t make you sadder but puts you at ease knowing someone else feels the same. Music is also just an outlet.

Turner, from Medora, said he played his first gig in 2017 before stepping away from performing for a while.

Once he started hanging out with Bedford’s Cody Ikerd, they wrote songs together, and Turner started listening to independent artists.

“It really inspired me to try and turn my stories around, like growing up in southern Jackson County in the middle of nowhere and my stories and stuff with my buddies and hunting and fishing and just growing up there, in songs,” he said. “I always try to do that.”

Whether he’s going through a tough situation or feeling emotional, Turner said he’ll write a song about it.

“I spend a lot of time in the woods in the fall hunting, sitting alone in the woods and taking a lot of time to think,” he said. “I’m going to sit in my tree and write the lyrics. I have lyrics in my phone that just need to be converted into a song. I get a lot out of it. It’s a way of expressing myself. »

Woodall is originally from Princeton, Kentucky, and moved to Jennings County in 1980.

She said she was involved in church music and wrote worship songs and was a worship leader. Around 1996, she began to write secular songs and attend songwriters’ workshops.

“I played coffeehouses in Louisville and Indy, bookstores, open mics in the tri-state area early on,” she said.

Once music became her profession, she was featured as opening acts for notable artists such as Ramblin’ Jack Elliott, Nickel Creek and others. She also performed in a songwriter showcase at the Bluebird Café in Nashville, Tennessee.

Woodall’s musical training stems from his parents’ love of music. Her father, Clarence Woodall, is a retired band manager who, at 96, still plays saxophone in bands.

“He comes from the big band era, and between him, my older siblings with multiple albums and the genes I inherited, I discovered my love of creating my own music and being able to share – some without lyrics, but most of them make it have lyrics,” she said. “It’s a creative experience and an art form, and I feel like there’s something missing if I don’t actively participate.”

Crossroads Entertainment Inc. hopes to bring Crossroads Acoustic Fest back this year after it was held in 2018 and 2019 and canceled the past two years due to the COVID-19 pandemic.

“This event and similar events, we’re just trying to bring great original music to Seymour,” Busby said. “A lot of times it’s artists from anywhere – Nashville or Virginia or wherever they’re from. But we also like to take the opportunity to shine the spotlight on some of our local musicians, some of our local talent.