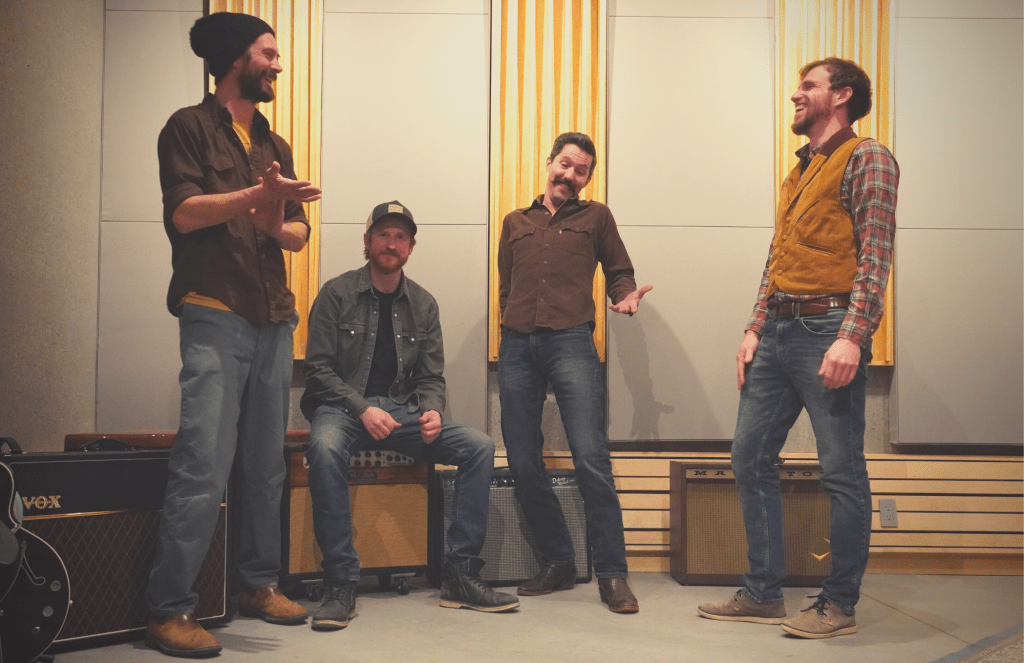 Local indie rock band Blitzen Coast are back on track after a hiatus from the COVID-19 pandemic and have just dropped a new single.

The band is made up of musicians already familiar to many of the music-loving residents of the Columbia Valley, with the rhythm section (Patrick Carrick on drums and Fraser Smith on bass) from popular local cover band Small Town DirtBags teaming up on synthesizer Tim MacIntosh and guitarist and singer-songwriter J. Stovell.

Stovell, MacIntosh and Carrick had played together in late 2019 and early 2020, and even produced some demo singles, just before the pandemic hit. They went on a little hiatus (along with the rest of the world), but as restrictions eased they added Smith in 2021 to form a four-piece band.

With life more or less back to normal, Blitzen Coast was back in the studio earlier this year, and the new Radio Gap single is one of the fruits of that labor.

the pioneer was lucky enough to hear the song before it was uploaded, and can attest that the lively tune is undeniably catchy, landing in a sweet spot somewhere between pop and rock, with enough twists and turns to keep listeners hooked ( and most likely groove a few dance steps) down to the last note.

“We’re excited to release it (Radio Gap),” Carrick said. the Pioneer, the addition of this single is a bit more polished than the demos the band released previously. “We want to attract as many ears as possible.”

Blitzen Coast is hosting a unique launch party on Saturday, June 11 at Arrowhead Brewing Co, giving concertgoers across the valley their first live look at Radio Gap along with a host of other original tunes.

The song is a marked departure from the bluegrass-tinged folk style common to many other Columbia Valley bands, which the band says helps.

“It’s a different tone than what you might expect in the Columbia Valley, but we’re proud of it,” Carrick said. “It’s important for your music to stand out, I think, and I like that just when you think you know where our songs are going, there’s a change. We are happy with the quality of the music and we all have fun creating songs together.

The group plans to release a second single this fall and hopes to tour the Kootenay region, if grant applications to support the tour are accepted.

Radio Gap can be listened to on Spotify, Apple Music, Amazon, YouTube and most other streaming platforms. The unique launch party show begins at 7 p.m. at Arrowhead and tickets are $10 at the door. Longtime Valley musician Oso Simple will open the show with a set of original acoustic songs.

To find out more about the group, visit Blitzen Coast at Facebook.