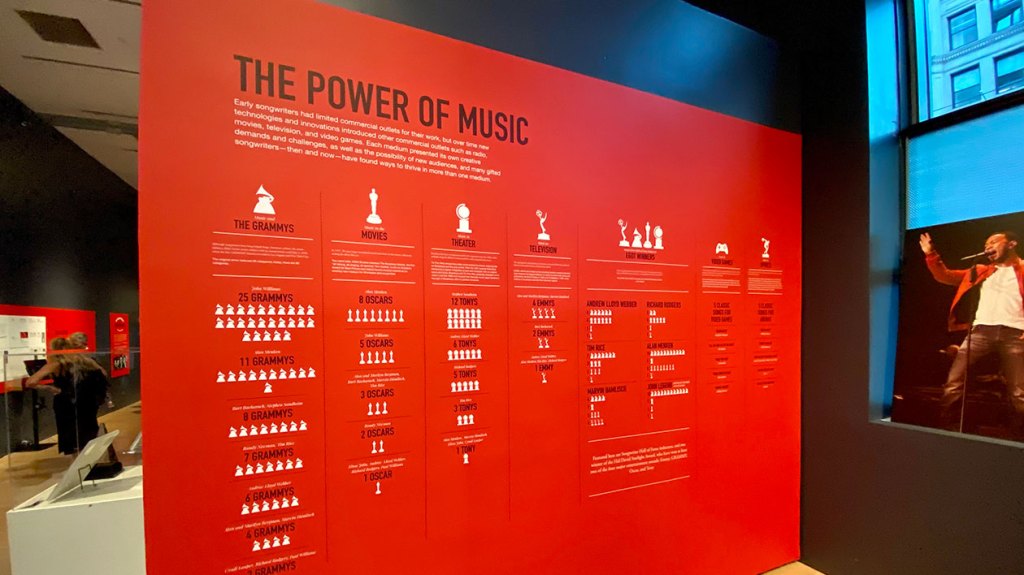 The more than 50-year effort to one day create a Songwriters Hall of Fame museum has turned into a traveling exhibit, with New York City hosting the kick-off show. Dubbed Songwriters Hall Of Fame Songwriting Experience, the exhibit is currently housed at CUNY Graduate Center James Gallery in Manhattan through July 24.

During a mid-June opening celebration, Santelli said the travel experience “is a taste of what is” at LA Live’s Grammy Museum, where the songwriting experience has a permanent residence. Yet the desire to one day have his own home turned into the traveling exhibition SHOF Songwriter Experience. Later this year, the organization plans to announce when the expo will travel to other cities.

Getting to this point of having a traveling show has been a long time coming, or as president of the National Music Publishers Association Irwin Robinson said in his opening remarks at the exhibition premiere, ‘it’s been a long and winding road’, quoting Paul McCartney’s song as he gave an abbreviated version of the story behind the museum .

With the birth of the Songwriters Hall of Fame in 1969, an annual event was created to honor and induct great deceased and living writers, hopefully with the goal of raising funds to build a possible museum, Robinson said. The creators of the organization and the museum were music publishers Howie Richmond and Abe Olman, and songwriter Johnny Mercer.

“The first induction ceremony took place in 1970 under the presidency of Johnny Mercer. [SHOF] president and Frank Sinatra, who was the honorary president. Among the songwriters inducted that night were Richard Rodgers, Irving Berlin and Cole Porter,” Robinson said.

As the annual SHOF awards event has grown, “fundraising for the museum, however, has become problematic,” he recounted. “As the cost of the ceremony increased each year, all proceeds were used to maintain a small office in New York with just one employee.”

Still, in 1980 SHOF was able to open a small exhibit in One Times Square – but that space was lost after a few years, he added.

In 1999, another effort was made to create a SHOF museum, but that too failed. In 2000, Linda Moran worked for SHOF, and she “had the organizational skills and contacts to put SHOF in a position of strength for the future, which she did,” Robinson said.

Eventually, according to Robinson, Moran suggested that SHOF hire a consultant to determine what kind of cash a museum would need to operate, and the conclusion came back that there would not be enough cash to fund an ongoing museum. Instead, the consultant suggested a traveling exhibit — and after many starts and stops, especially during the COVID-19 pandemic, the Songwriter Experience traveling exhibit became a reality in mid-June at the CUNY Graduate Center. aforementioned at 365 Fifth Avenue in the former Altman Department Store B Building.

The exhibition is open to the public free of charge from noon to 6 p.m. from Sunday to Wednesday; and from noon to 8 p.m. on Friday and Saturday; it is closed on Thursdays. All visitors must show proof of vaccination and government-issued photo ID to enter.