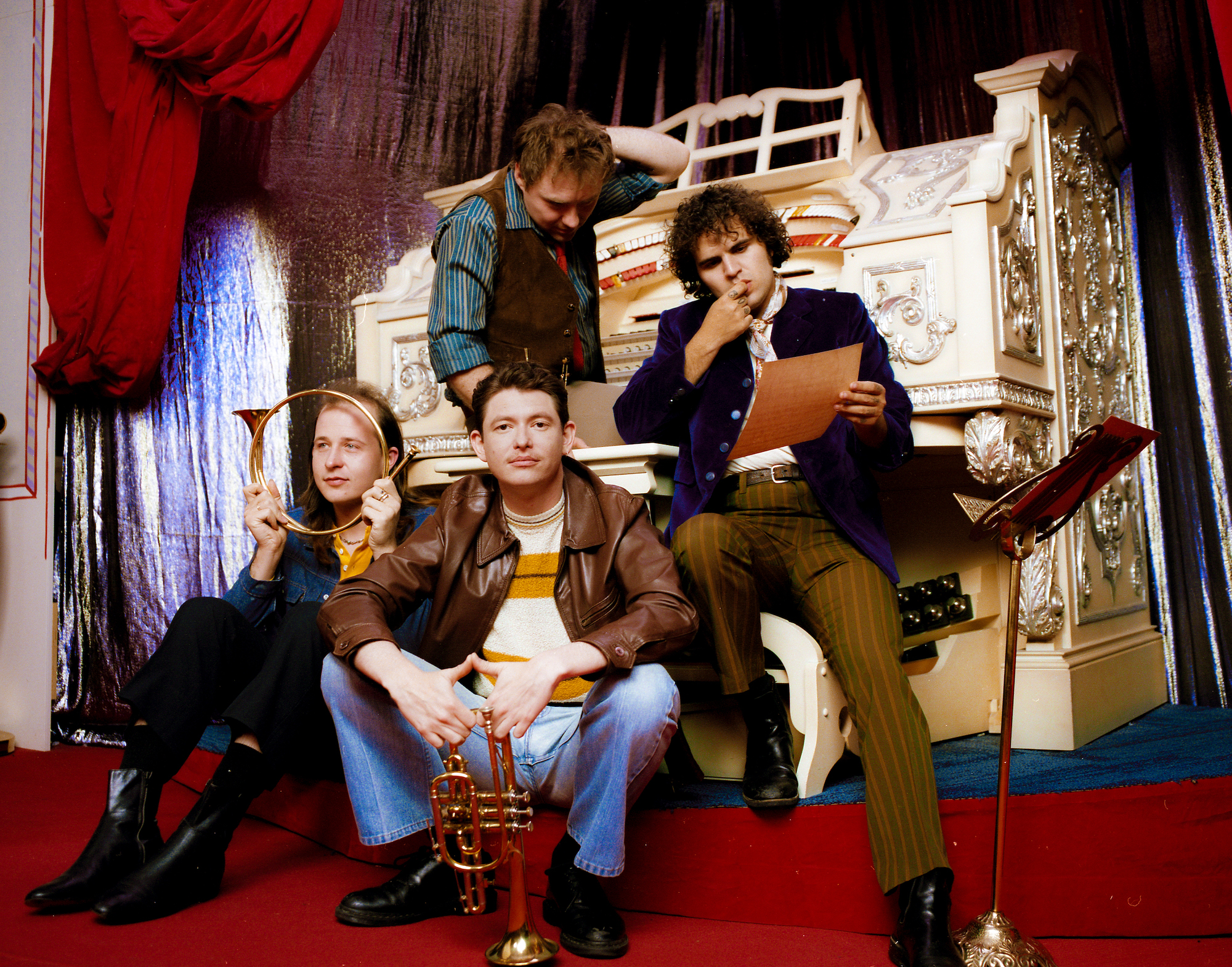 The unstoppable Surf Curse are entering a new era in their already busy career. Not only have they doubled their staff, with the addition of guitarist Noah Kholl and bassist Henry Dillon, but they recently infiltrated the speakers of TikTok users around the world with the viral and platinum hit “Freaks,” and now number more than eight million people. among their monthly Spotify listeners. With a huge following now following their every move, as well as a change of label to Atlantic Records – home to artists like Lizzo, Ava Max and Ed Sheeran – it’s obvious that the pinnacle of their success is yet to come.

magic hour, recorded at the famous New York studio Electric Lady, is “our enthusiasm for rock music and being in a band”, explains guitarist Jacob Rubeck. From plaintive blues rock to fierce cuts, the record has already spawned defiant singles like “Lost Honor” and the reflective latest release “Self Portrait,” all of which are set to be featured on their next tour, including a stop at the first LA Primavera. Sound, in a few days.

We chat with them about everything from dream journaling, why despite their name they’re not a ‘surf-rock’ band, magic hourand this upcoming tour.

Head below to read our chat and watch the “Self Portrait” video, right now…

Hi Surf Curse! How are you? What was the first thing you did this morning when you woke up?
Pseudo: I kept a dream journal and every morning I wake up I try to write down what I remember from my dreams. Today wasn’t much. I just wrote “Scary carnival ride.” My father was there. »
Jacob: I had to go on vacation, so I’m literally on a beach in Rhode Island answering these questions.
Noah: Currently, I’m on tour with my other band, Color Green. I had lunch with my mother this morning and watched a documentary on orangutans.
Henry: I am…. awake…

First of all, how did you meet?
Pseudo: Jacob and I met in college. I was in awe of how cool his MySpace page was because the background was all The Velvet Underground. Noah and I met while playing together in New York. The first was a brunch show at Baby’s All Right. It was a pretty bad show, but it’s brunch! And I met Henry when he was working the front door of Non Plus Ultra in Los Angeles and was a huge fan of his music.
Noah: Henry and I met on Valentine’s Day at a Current Joys show. We celebrate our friendship anniversary that day.
Henry: I’ve known these guys all my life.

Let’s also talk about your name! What inspired this name? Is there a story behind?
Pseudo: We used to be called Buffalo 66 and when we needed to change it, Jacob invented Surf Curse. At the time, we were very into Wavves and all that lo-fi, garage rock. These days it’s very hard to have Surf in the name because most articles tend to lock us into a bunch of “beach lo-fi, surf-rock”, which isn’t really that anymore. that we do. And that’s the real curse.

You are based in Los Angeles, what inspires you the most in this city?
Pseudo: It is not at all a pedestrian city! But I like to walk and listen to music. Sometimes it feels like an apocalypse with the heat and the trash. LA may look like paradise, but there is darkness that exists just below the surface. Like that scene in Mulholland Drive where this weird monster pops out from behind the gutter. It is extremely LA.
Jacob: For me personally, I live in Los Angeles but I don’t like it. The city upsets me in many ways. I don’t drive so when you have to walk you have to really feel the garbage, the smell and the reality of the city. It’s good because it keeps you humble. For me, it’s the people who really give me life and inspire me. There are songs that I just do because I know my friend or my bandmate would like it because it’s totally their thing.
Noah: The way the sunlight hits my curtains in my bedroom in the morning and watching the wind blow through the palm trees is inspiring, and so are all the beautiful, creative people who kill it.
Henry: There is a low-frequency hum that emanates from downtown Los Angeles at all times of the day and night. I find that very inspiring.

Congratulations on the release of “Lost Honor”! You also wrote the song, tell us about your writing process!
Jacob: Nick and I did this interview that left a bad taste in my mouth. The feeling really reminded me of that movie called The lost honor by Catherine Blum. I kept thinking about Nick and the years we bonded on the road, creating songs and the hard work we put in. Nick has such a sweetness, purity and talent in him that I’m lucky to have experienced. It’s just something I protect.

And, the single is taken from your new album, magic hour! What can we expect from this album? More titles like “Lost Honor”?
Pseudo: We call this album our rock and roll collage, so each song has a different flavor of influences behind it. I would say it’s full of surprises, twists and turns. Definitely different from anything we’ve done before. It’s a rock n roll odyssey.
Jacob: Lots of influences from Sonic Youth to the Rolling Stones. It’s an album that we hope and believe will always be part of people’s lives. Something to come back to at any age or time.

Do you each have a favorite track from the album?
Pseudo: I should probably say “Self Portrait” because it’s my favorite live song or “Fear City” because it’s the craziest song we’ve ever done.
Jacob: Nick wrote this beautiful song “Unwell” that I can’t wait for people to hear. It’s so soft and heavy, a great combination that Nick has perfected. It’s just a good spotlight on everyone playing. It’s as if we were all together.
Noah: I think my favorite track is “No Tomorrows”. I really think that sums up what we can do as a band sonically and I really felt our spirits etched in this one forever.
Henry: My favorite track is “Cathy”. It’s super fun to play live, and Noah’s guitar solo in the bridge excites me.

You recently announced your North American tour! Describe to me in a few words how you all feel on stage!
Pseudo: It’s one of the best feelings in the world. I love our audience and feel very lucky to play in front of such enthusiastic fans. I also love playing music with these guys. It sounds like generic answers, but it’s the whole truth.
Jacob: There is a beautiful connection with the people who come to the shows where our energies collide and they are all together. It really is a special feeling.

Apart from all the exciting things described above, what else do you expect in the coming year?
Pseudo: I’m very excited to go to Mexico and play at Corona Capital. I also can’t wait for 100 Gecs to hopefully release their album.
Jacob: For me, it’s just sharing all those songs that we’re so proud of with the rest of the world. The simple fact of already seeing the reactions of people during these shows puts us in full happiness mode.
Noah: I am happy to eat all the known sandwiches in the regions where I am.
Henry: I can’t wait for Christmas!