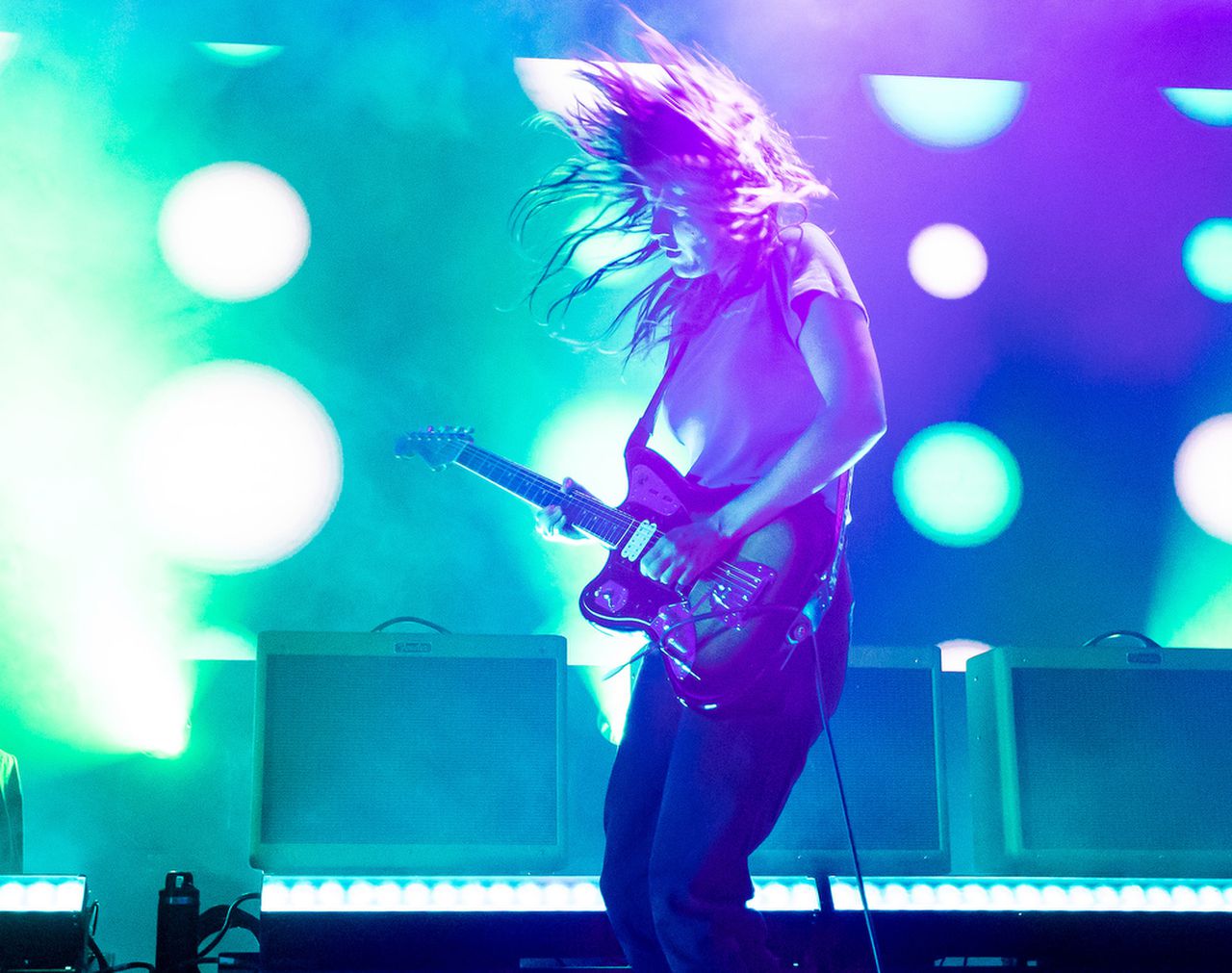 Courtney Barnett makes it look and sound so easy. Of course, it is never so easy to become such a good singer, songwriter, guitarist and entertainer.

Barnett’s 2015 debut album, “Sometimes I Sit and Think, and Sometimes I Sit,” released when she was in her twenties, became an instant contemporary classic. Tracks like “Pedestrian at Best”, “Elevator Operator” and “Depreston” have weaved vignettes and melodies into songs that have been steamed over 100 million times in total.

Next, Barnett teamed up with fellow slacker-rock ace Kurt Vile for a compelling collaborative album, “Lotta Sea Lice” in 2017. This album featured the resounding duet “Over Everything” and a soulful cover of “Fear Is Like A Forest”, a song by Jen Cloher, Barnett’s former partner.

On Barnett’s 2018 second solo album, “Tell Me How It Feels,” the sound got a bit darker and harsher, sometimes reminiscent of Nirvana, especially on the song. “I’m not your mother, I’m not your female dog.” The album cover photo was appropriately tinted blood red.

Like Kurt Cobain, Barnett plays left-handed guitar, writes smart, direct parts, and is more likely to play an interlude than a solo. For my money, she’s the most interesting singer-guitarist-songwriter triple threat since the start of the White Stripes era, Jack White.

His voice can sound punky and harsh on one song and pretty and vulnerable the next. Barnett’s lyrical imagery encompasses both the everyday and the surreal. His songs can be conversational, playful, dark as hell, or all of the above.

Barnett’s first two solos reached the top 25. She also found the bandwidth to found the label Milk! Folders. As well as releasing music by Barnett, Cloher and other artists from Oceania, the imprint has provided Australian distribution to US bands like Sleater-Kinney and Chastity Belt.

In November, Barnett released his fourth album, “Things Take Time, Take Time”. His return gives off a more hopeful and tender sound. Highlights include the velvety “Rae Street,” star-studded chime “If I Don’t Hear From You Tonight,” and sunset arpeggio “Before You Gotta Go.”

The new sauce? A new rhythm sensibility, with the use of vintage-sounding drum machines in the mix, and Warpaint drummer Stella Mozgawa as co-producer. Besides buying or streaming the finished album, fans can indulge a music geeks dream and mix the album themselves, at least on the Stem Mixer section of Barnett’s website.

This summer, Barnett hosted Here And There, a traveling women-centric festival featuring a changing lineup of indie rockers like Lucy Dacus, Wet Leg and Snail Mail. As summer turns to fall, she stays on the road for a solo tour. Stops include the southeast and east coast before heading to Europe and finishing in Australia. Full list of tour dates at courtneybarnett.com.au.

On a recent afternoon, Barnett, who has ocean blue eyes and a shaggy haircut, checked in via Zoom for a 15-minute interview. The edited excerpts are below.

Courtney, before a concert, are you more looking forward to playing guitar or singing?

The last album “Things Take Time, Take Time” seems sparse but complete. Can you talk about finding the sound for this record? There is just enough stuff, but never too much.

Oh, that’s a nice way to put it. I guess I wanted it to be pretty simple, but I wanted some luscious sounds. And I kind of wanted it to sound like you were sitting right there, you know, in my living room, listening to what I was doing. Because I wrote quite a lot during the periods of confinement. I did a demo with just a drum machine and a guitar, and I wanted it to have some of that energy. I wanted it to be kind of simple and get those stories out there, those snapshots.

The grooves really draw you in. It’s by no means a funk record, but the beats work with the songs, lyrics and vocals like few rock records do. Phil Collins’ records used to do that in a fascinating way.

Yeah, I think that’s what’s so cool about Stella (Mozgawa, co-producer and drummer). I would take a song from her that had a pretty basic kind of beat or something from a drum machine or a drum machine that I was using. And she was like, “OK, how can I make this more interesting and more unique?” But always keep it seemingly simple. She masters that.

For live shows, how do you create a setlist that works for this period of your career? You now have several albums of material to extract. You have a dedicated fan base that wants to hear some of the latest and greatest, but you also have your own classics that will connect more with casual fans.

It’s a fun challenge. I think it gets to the point where it starts to get a little harder because there are more songs to choose from. More upbeat and mellow songs, and sometimes you just have to match the right surroundings to the right songs. But yes, a regular mix of old songs and new songs.

This is a question that no one has ever asked me in my entire career. I feel like there’s a bit of blues swing, I think, to this song. I think it would be fun to hear a real bluesy version of this song.

There are a lot of things I like about the 2018 album “Tell Me How You Really Feel”. The song “Crippling Self-Doubt and a General Lack of Confidence” tears up and features guest appearances from Kim and Kelley Deal of The Breeders. What did you like about mixing with them in the studio and what they brought to this one?

Yeah, that was fun. I think we went to visit them in the studio, and they were doing their album and we sang on one of their songs. So yeah, I sent them the song and just said, “Do you want to do anything on it?” Because obviously I think they’re great musicians, great people. I wasn’t really sure what I was looking for. But then they sent back these awesome harmonies and some little guitar parts and it sounded so good. I feel like that really brought this song together. That kind of chorus made it really fun and different.

Since your songs don’t sound like showbiz, they just sound like a person, I sometimes wonder where you were when you wrote them and what was going on in your life. “Before You Gotta Go”, from the latest album, is one of them. What made you want to write this song and where were you when you wrote it?

I wrote it over a few years, really. As. I started with the guitar part. I had this kick for ages, and couldn’t quite put words to it, then I found the chorus. And then it took a few more years to write the rest. Like most songs, it is inspired by multiple experiences and multiple moments in life. A bit of a puzzle, put them together. But yeah, the main energy of the song is about finding forgiveness in friendships or relationships or any sort of meaningful connection with another human. Just like compassion and forgiveness, I guess.

The recently released documentary about you, titled “Anonymous Club”, was filmed over a period of three years. Was there some sort of line you gave the filmmakers in that, OK, I’m all for including that in the movie, but maybe not that? Or did you have a previous music documentary in mind for tone?

No, we kept it pretty… So the film was directed by one person, (British cinematographer) Danny Cohen. He’s the director, and he was a cameraman and a sound operator. [Laughs] And he’s a friend of mine, so we worked pretty closely together, and we were kind of in constant communication about what we wanted and didn’t want and liked and didn’t like. I didn’t really need to tell him too much because he was respectful of private moments or such. It was kind of unspoken, you know, just kind of a common sense thing. But he was very respectful of my space and my time. But yeah, we worked together to find a place, that kind of common ground.

The documentary, three full solo albums, a few EPs, Kurt Vile’s collab album. What haven’t you done yet that you would like to do eventually?

I mean, there are a lot of things like that. Something I did recently for the documentary “Anonymous Club”, I took a few days and made a soundtrack for it, which I really enjoyed doing. And I would like to do more of that, I think, in a broader sense. It was mostly improvised. And then yes, I write more and I also do a lot of visual art. So I just think like spending more time doing all those things.

Kind of a random question to wrap up: I used to listen to your album “Sometimes I Sit and Think” a lot with a longtime significant other. After this relationship ended, I couldn’t listen to your music for a long time. Have you ever had an experience like this? An album or an artist that you could no longer listen to after a breakup?

I’ve heard of it, but I don’t think I’ve ever really had it. Not something that triggers that emotional memory to the point of making it untouchable. I don’t think I had that, which might be a good thing.