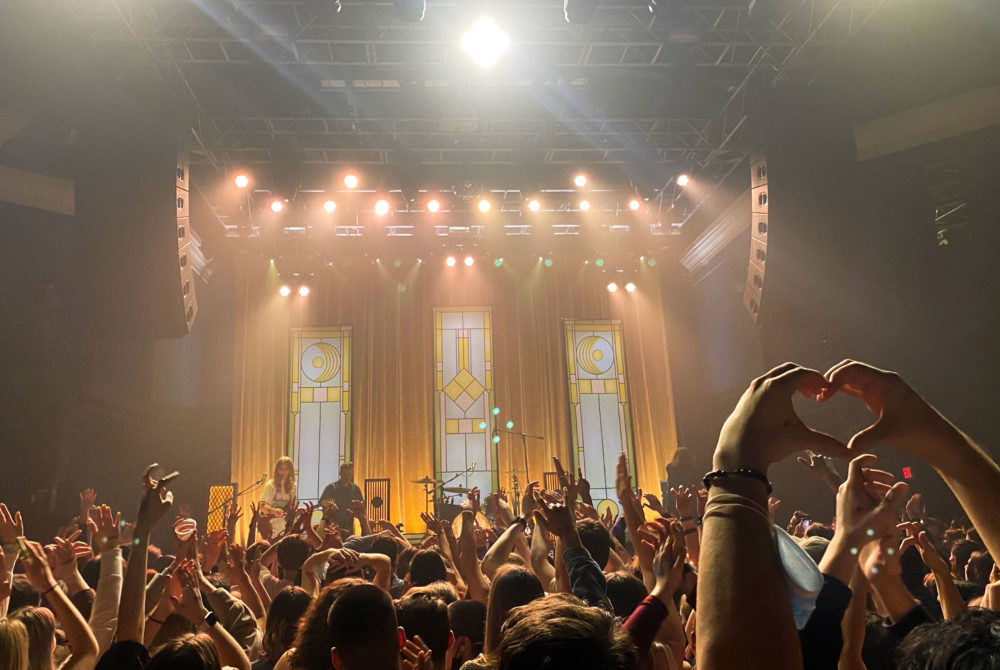 Electric indie rock band The Backseat Lovers title at 9:30 a.m. Club on February 28 for an enthusiastic crowd, overflowing the doors and singing along to every lyric.

The young group of four members met when they were still in high school, and it was in their town from Salt Lake City, Utah, where some of their early songs first gained popularity. But four years after graduating from high school, they came to DC with nearly 4.3 million monthly listeners on Spotify and “Kilby Girl”, their TikTok viral song which has more than 115 million plays alone.

The four members of funky soft-rock bandaged Over Under opened the show with an hour-long performance featuring their three published singles, “Yellow Roses”, “Backwards Forwards” and “Time to Waste”. Lead vocalist Taylor Gywnn brought an eccentric energy to the stage with Freddy Mercury mannerisms and a mesmerizing delivery of lyrics.

The Backseat Lovers arrived around 9:30 p.m. and kicked off their set with a three-and-a-half-minute wordless jam session featuring the clean, powerful electric guitar that defines this band’s sound. The crowd started dancing and dancing almost immediately and screamed with excitement as this wordless jam led effortlessly to their debut song “Pool House.”

The massive crowd started singing along with the first verse, a feeling the band is likely getting used to after a sold-out 2021 tour and gigs at major music festivals like Lollapalooza, Shaky kneesOhana Festival, Life is Beautiful and Austin City Limits Music Festival.

But vocalist and guitarist Joshua Harmon said it was during a 2019 gig in Vancouver, Canada, where he realized the band had fans outside of Utah.

“People had flown in from other parts of the country to come see us, and I just remember the feeling in that tiny, cramped space, and everyone was singing back to us,” he said. stated in the band’s biography. page. “It was just a really humbling feeling to know that people really cared. [our music] outside of our circle of community and friends.

Harmon and lead guitarist Jonas Swanson cited a wide range of musicians who influence The Backseat Lovers’ rugged and edgy indie sound, ranging from folk and country stars like Willie Nelson, Johnny Cash and Tom Russell to rock giants like Weezer, Radiohead and Cage the Elephant.

After “Pool House”, The Backseat Lovers played a 13-song together which left the audience in shock. The setlist included two previously unreleased songs, “Growing, Dying” and “Know Your Name”. And the band only left their setlist once to play a crowd-requested song, “Davey Crochet,” from their 2019 album “When we were friends.”

After a brief reunion amid a “Davey Hook” chant by the crowd, Harmon admitted they hadn’t played that song in a while and might “mess up”.

The fast tempo and sublimely layered rhythm of guitar, bass and drums disguised any hiccups they might have had and made it my favorite song of the night. The audience was banging their heads and happily singing along to Harmon’s full-bodied performance of the agonizing yet light and romantic lyrics:

“I guess there are some things you shouldn’t know, but I’m going to tell you anyway,” said the Words to say. “And you can tell me if you’ve had a bad day.” I’ll teach you to laugh if you can teach me to crochet.

Halfway through the set, the band performed their debut album “Out of Tune”, a five-minute track Single with the catchy chorus, “We were just a couple of posers with guitars always out of tune.”

While Harmon’s raspy, emotionally raw vocals remained consistent, the electric guitar in this song seemed to have a lighter background than in their newer songs, with more sporadic but stylized solos throughout. The song also alludes to The Backseat Lovers origin story with a lyric in the third verse:

“I created a band without a drummer or microphone”, Words to say. “I had a show in a week that I thought would be the show that would change my life.”

Harmon played in several bands throughout high school but ‘nothing stuck’, according to band online Biography. But in his senior year he started writing songs independently and soon, one by one, he added his three group mates – Swanson, drummer Juice Welch and bassist and background vocalist KJ Ward.

“I had this little collection of songs that I had never tried to put behind a band arrangement,” Harmon said in an interview.

There was a collective gasp from the crowd when the band said they only had two songs left to play – “Maple Syrup” from “When We Were Friends” and “Still a Friend” from their PE “Elevator Days”.

As soon as the band left the stage, the audience started chanting desperately “one more song”.

“Still a Friend”, just as engaging as the rest of their set, didn’t seem like the right song to end the gig as it’s one of their lesser known tracks. So I joined the crowd in the excitement when the band returned to play “Sinking Ship” from “When We Were Friends,” as an encore.

This article originally appeared in the March 7, 2022 issue of The Hatchet.