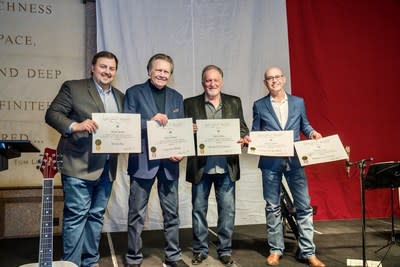 The BMI Million-Air Awards commemorate songs that have reached over one million streams. Most notably, James’ mega-hits “Hooked On A Feeling” and “Suspicious Minds” have racked up 9 million performances each. Other songs that won certificates included “Always On My Mind” (7 million), and “One Hell Of A Woman” and “Moody Blue,” each receiving certificates for the 1 million mark. Together, these 5 songs have over 27 million cumulative performances.

Texas’ The self-proclaimed culture is unique in a way that is respected and envied around the world, as is its songwriting. Writing some of popular music’s most beloved and enduring songs, Mark James is a songwriting legend.

Saturday’s Hall of Fame Public Awards Show at from Austin Paramount Theater honored James, putting him in the spotlight and inducting him into the Texas Songwriters Hall of Fame. Sponsors and patrons celebrated James and the other inductees with an evening of awards, tributes and performances from past inductees, Grammy winners, acclaimed songwriters and recording artists.