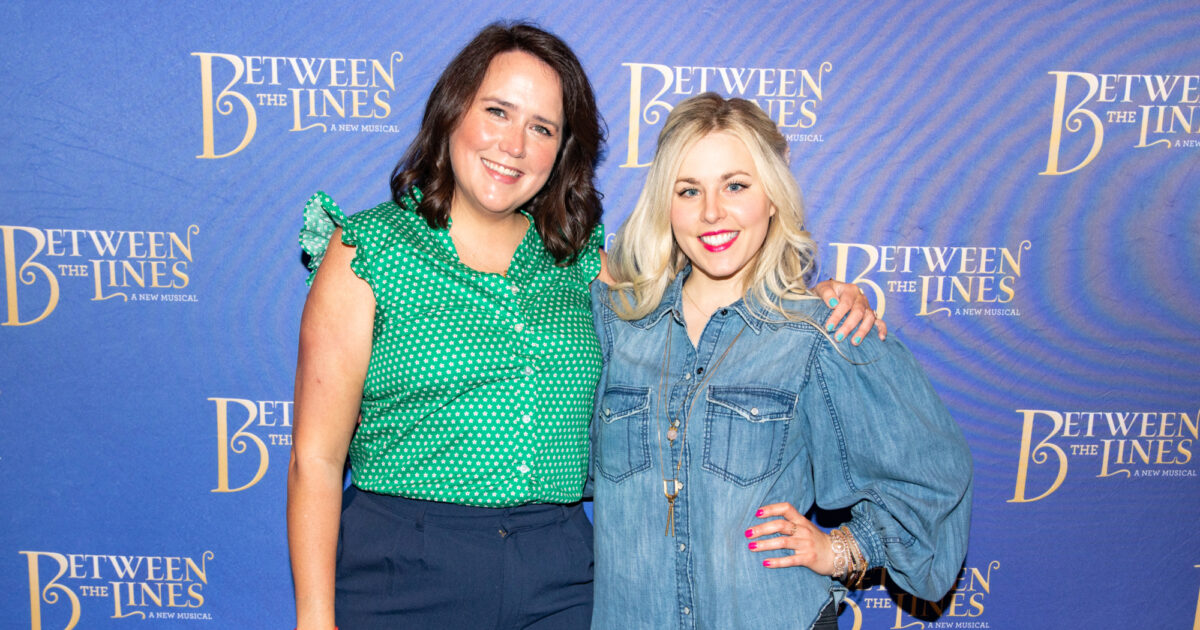 “I think we usually find projects that scream optimism,” says Elyssa Samsel, one half of a songwriting duo with Kate Anderson. “If you ask the public to think about how to be optimistic, kind and compassionate, then I hope you create good ripple effects in the world.”

In 2014, Samsel and Anderson were at a low point in their lives. Their partnership had started four years prior at musical theater studio BMI Lehman Engel, and although they clicked right away, the duo’s career had yet to take off. “Everything we applied for as writers wasn’t happening. We didn’t know what to do with the musical we were trying to get produced. Nothing was happening,” says Samsel.

Then they got an email from bestselling author Jodi Picoult, who wanted to shoot Between the lines, the YA novel she co-wrote with her daughter Samantha van Leer, in a musical, asking them to try out for the job.

Picoult had reached out to songwriter Bobby Lopez for recommendations, and he admitted his suggestion might sound like nepotism…but his sister-in-law and her partner had written a similar show… (Kate Anderson is Kristen Anderson Lopez’s sister.) He directed Picoult to Pat Cook, the director of musical theater and jazz at BMI who also runs the famed songwriting workshop, and Cook (“uninvited,” Anderson says) also mentioned that the show Samsel and Anderson had been working on made him think it was right up their alley.

So Picoult went to their website and checked them out.

“Thank god we had all these calling cards…all the songs you write that are on shows that never happened or never see the light of day, they always help you get some seats,” Anderson said. Like this musical they couldn’t produce but led to recommendations: camp wish-No morewhich the two describe as “a dark and twisted story about a rehab camp for girls who think they’re Disney princesses”.

Samsel and Anderson wrote three songs to audition for the project and landed the job. Remarkably enough, these three songs even made it onto the show (“very close to what they originally were,” says Samsel): “Between the Lines,” “Allie McAndrews,” and “A Whole New Story “.

Between the lines premiered in 2017 at the Kansas City Repertory Theater and, following a pandemic delay, debuted on New York Off-Broadway in June 2022, officially opening July 11. The show features a score by Samsel and Anderson and a book by Timothy Allen McDonald. Arielle Jacobs stars as Delilah, a teenager from a recently broken home who is bullied at her new school and turns to the pages of an illustrated children’s fairy tale for escape. The lines between fact and fiction begin to blur when she falls in love with the book’s main character.

The musical lives in two worlds: the real life of Delilah and the fictional world of the fairy tale. In her real life, audiences see the shy teenager both in her school setting, among a calculating popular clique, a potential new friend, a sympathetic counselor and a few generic teachers, and in her home life, with her strained relationship with his mother (Julia Murney) exposed. The world of the book is populated by the sorts of characters one would normally see in a book whose leader is a brave Prince Oliver – a bossy queen, a troll, an insipid princess, a trio of mermaids, a dog who speak, a wicked wicked. But even in this fairy tale world, the audience sees two existences… the story of the book and the life of the characters when the book is closed (the queen is a drinker, the dog is in love with the princess, the prince Oliver wants OUT).

READ: Julia Murney and Arielle Jacobs on bullies, beleaguered moms and joy in Between the lines

Samsel and Anderson suspect that these are the fairy tale elements of their Camp-Wish-No-More this initially led to recommendations that Picoult consider collaborating with them. And while the duo sits solidly in the realm of quirky optimism (they’re also the primary songwriters of the Apple TV+ animated series central park), these are the most serious elements of Between the lines who really attracted them to the project.

“For me, it was the story of the divorce that Delilah was going through,” Samsel says of her attraction to Between the lines. “She’s the same age as me when my parents divorced, and I really liked the mother-daughter relationship. This age is when I made some really big decisions in my life that all led me to where I am right now. I know how crucial it can be – not even at this age, but at this point in your life – when you’re at your lowest point and you really have to make a decision to stay there or get out of it.”

“For me, it was the outward feeling that Delilah had and that she had found a kindred spirit in Jules. This time in life can feel so isolating, and I think a lot of kids these days, maybe be more than ever, escape in various ways: The internet has become a huge means of escape,” Anderson says. “What happens to your reality when you escape so far into something? I remember feeling that at some point in my life too. Where things really looked like they were falling apart and I definitely had my own version of this fairy tale.”

In the end, Delilah must choose. She can stay in the book and marry the prince. Or she can start a new chapter in her own life, or rather, write “A Whole New Story.” And although Between the lines is filled with high-energy tunes and comedic songs (the school librarian, murdered by Vicki Lewis, sings her own imaginary 38-year-old banter with Pride and Prejudice Mr. Darcy), this decision Delilah has to make is where the duo’s credo of optimism really comes into play.

“It’s really easy to fall into the trap of telling your story in a way, like, ‘I’m so bad at this, I’m so bad at this.’ What you repeat becomes reality, so just learn to say it in other words [a lyric from the show]and spin it in a positive way…you’re the one actively changing your story,” Samsel says.

Picoult reuniting with Samsel and Anderson in 2014…when they felt most lost…and they in turn booked the job, certainly changed their story. In addition to their film debut in New York with Between the lines, songwriter credits now also include animated Disney featurette Olaf’s Chilling Adventure, the above central parkand the upcoming stage adaptation of another YA novel, book thief, another collaboration with Picoult and McDonald, who are co-writing the book. The book thief is set to premiere in the UK on September 17.

Between the lines until September 11 at the Tony Kiser Theatre. For tickets, visit BetweenTheLinesMusical.com.