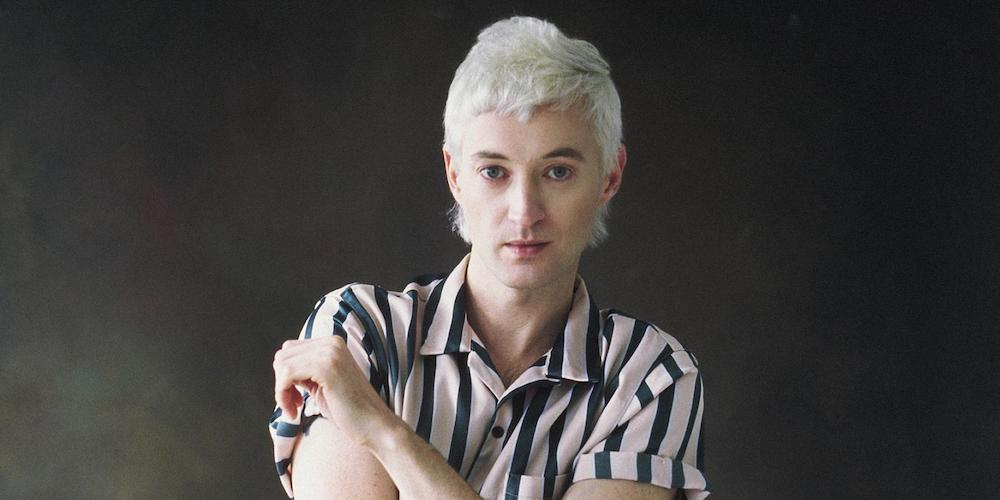 Over the last decade of his music career, Art d’Ecco strutted through glossy rock productions in platform shoes, dressed in white makeup and a bobbed black wig.

He wore the mantle of the big names in 70s glam-rock, knowing that people listen as much with their eyes as they do with their ears.

Refusing the bearded and robust mold of a rockstar, he sang in an androgynous whisper and dared the listeners to think about it strangely.

But with its latest version, “After the Head Rush”, he threw away the glamorous and binary insignia. d’Ecco now sports cropped blonde hair and his bare, natural face: a stark departure from the eccentric look he had cultivated for years.

By refusing to hold the pose he struck at the start of his career, his image has settled into something that feels more candid.

“I’ve been working on this character from Ecco’s Art for ten years, and times have changed. The larger statement of gender identity and being androgynous is no longer transgressive, and I have no room to paste that statement.

“I thought it was time to pivot and do something more honest with my image. Obviously, I’m not a natural blonde, so there’s a bit of lying going on!”

“After the Head Rush” seems to mark a lot of changes for Ecco, both musically and personally. When we spoke, he had just moved into a new apartment.

The empty walls were the same bright white as her hair, both promising new beginnings. By getting rid of the character, he sings from a place closer to his authentic self, a place where he has felt more comfortable lately.

“I had this whisper delivery on ‘Trespasser,’ and I was doing a concept about the entertainment industry with ‘In Standard Definition.’ With this album, I think I’m using my most natural singing voice. There’s a lot more confidence in the way I sing,” he said.

Stripping down the theatrical image brought a refreshing candor to “After the Head Rush,” with d’Ecco turning his lived experience into song. This approach was inspired by a visit to his hometown of Victoria, BC, Canada, which he cites as the first spark of inspiration.

“I was flooded with a stream of memories going back to those old kicks. This is the parking lot where I sneaked out on a Saturday night and drank with my friends. Oh, there’s the bush I threw up in. He stirred up all these emotions in me.

These remembered scenes of youth became the source of inspiration from which he drew. As he travels through the annals of his childhood and teenage years in Victoria, he reflects on the growing distance between him and that time.

The whole album is imbued with this intense memory rush, a golden aura of nostalgia covering the music. The songs are full of tenderness for the past, written with the prospect of a sobering future, after youthful optimism has faded.

Beyond the play on Neil Young’s “After the Gold Rush,” the album’s title embodies this idea, with d’Ecco placing himself “after the rush” of youth, entering a new era. of his life and his music.

The album’s title is also a cheeky reference to his biggest hit, “Head Rush,” providing an answer for those wondering what would come next.

If “Head Rush” is a rock anthem suitable for dancing in a bar full of reckless bodies, “After the Head Rush” is the soundtrack to the hangover afterward, waking up crusted in glitter and sorting through the memories of the last night.

But don’t confuse it with thin, frivolous party music. “After the Head Rush” is full-bodied and maximalist, with intricate instrumental layers that breathe and move together on every track.

The tracklist strikes a balance between scintillating youthful energy and tired, time-worn pessimism.

“Get Loose” and “Until the Sun Comes Up” are exuberant dance tracks, but these party anthems are strung between “Midlife Crisis” and “Run Away,” much more moody tunes using a dry wit to deal with the storm. middle-aged boredom.

D’Ecco keeps room for these two contrasting moods on the album, running side by side on parallel tracks, showing how one is created by the other.

“There is a duality with this album. When you’re young, it’s all about partying, having fun and falling in love. When you are much older, you have baggage, you have fatigue, you have to adopt a cynical game to survive. I want to write a timeline jumping back and forth. Half the album is upbeat partying, and the other half is songs about being old and tired.

Working within an industry obsessed with youth and the next big thing, many musicians adopt a wink and silence attitude towards their age. But d’Ecco approaches the subject without fear, with humor and finesse.

“I Was A Teenager” dances to the tune of its own ironic angst. “I was a person / not yet in debt / not yet a citizen filled with panic and dread,” Ecco sings, pitting existential dread against a catchy call-and-response vocal and applause groove .

“Midlife Crisis” offers a similar perspective: “Midlife so crushing I could move underground / but I just signed a lease for it / penalty holds me back.”

Given d’Ecco’s years of experience as a musician, this honesty is a way of striving for timelessness, having seen musical trends come and go. With the rise of streaming and the viral hit machine generating immense profits on TikTok, there is new pressure for artists to bend to the algorithm.

Yet despite this shift to digital music, d’Ecco remains fiercely analog, unwavering in its creative vision.

“I yearn for shrewd songwriting and smart music production, not fleeting ones that come and go. I want my music to be enduring. The only way to fight it is to fight, to be yourself and to write good music.

On the album’s titular final title, d’Ecco sings a repetitive refrain: “Now that it’s all gone, gone, gone…”. At the song’s climax, his voice is drenched in reverb, and we can hear every word echoing, already moving into the past, leaving afterimages of himself.

It’s a fitting way to end an album that clings to the past, reliving its beauty. But by announcing these childhood memories and sending them on their way, the future opens up.

Ecco’s Art is about to embark on a new direction, and as long as it continues to perform, it will harness a different kind of rush.

“At the end of the day, any musician you talk to can stick to this statement: We just want our songs to be heard. Bringing this song to a live audience, nothing beats that. It’s a real high. , it’s the ultimate head rush.

Ecco’s Art Will Play Live Shows Through Fall 2022, Tickets On Sale here. You can find his music on all streaming platforms, and on band camp.