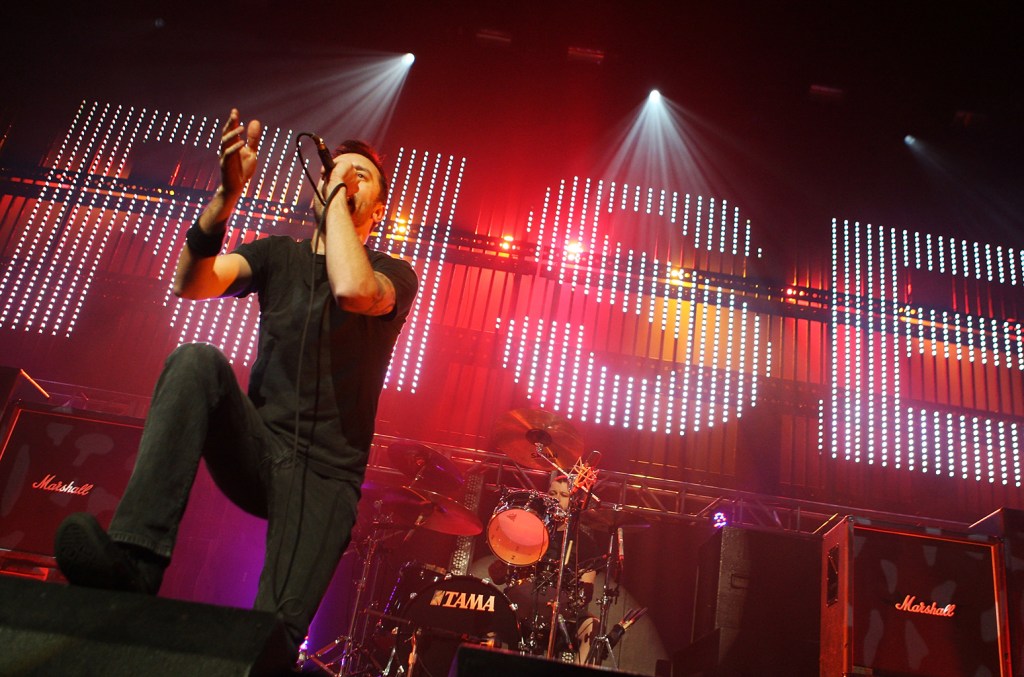 This week, Billboard celebrates the 30th anniversary of our alternative songs chart. Here, we take an in-depth look at Rise Against’s unusual run of “Saviour” on the charts in the late 2000s, and how it ended up becoming one of the biggest hits in alternative song history.

If there’s one moment in Rise Against’s career that could have predicted the Chicago punk rockers’ 2009 hit “Savior,” it was the release of “Swing Life Away,” the second single of 2004. Counterculture siren song.

That might be a strange thing to say, since sonically the songs couldn’t be much different. “Swing” is an understated acoustic ballad with minimal percussion and other instruments. “Savior,” on the other hand, sports one of Rise Against’s most electric choruses to date, paired with an explosive drum beat and dizzying guitar riffs. “Savior” is the kind of song you would play after “Swing” in a live show to get the audience on their feet and dancing.

But in 2005, when “Swing” was released as a single, “Rise Against weren’t known as a radio band. They were loud, political, gritty, sometimes abrasive. ‘Give It All,’ the predecessor to ‘Swing’ and the first classification of the group Billboard single (No, 37, Alternative Songs, January 2005), was a clear link to the rockers’ hardcore punk beginnings. Despite its strong single hook, it wasn’t exactly hinting at arena-ready choruses. “Swing” not only sported an even catchier chorus and a more accessible sound due to its acoustic presentation, but its lyrics – reflections on proletarian life from its front porch – were linked to many backgrounds. There was an ounce of social commentary, sure, but it was barely overt.

“Swing” peaked at No. 12 on Alternative Songs, Rise Against’s first top 20. His next album, 2006 The victim and the witness pushed the band into the top 10, thanks to peaks #7 and #6 of “Prayer of the Refugee” and “The Good Left Undone,” respectively. Along the way, Rise Against had begun to find its voice in rock radio: often politically charged lyrics paired with hard-hitting hooks, songs that radio programmers were more than happy to place among the Linkin Parks and Papa Roaches of the time.

But enough about that. “Savior” is the second-greatest song in the chart’s 30-year history, according to Billboard’s 300-song ranking of Alternative Songs’ most essential songs on its 30th anniversary. It’s only behind Muse’s “Uprising”, released the same year, which beat out songs like Portugal. The Man’s 20-week No. 1 “Feel It Still” and hits by the Foo Fighters and the Red Hot Chili Peppers, the top two artists on the corresponding 30th Anniversary All-Time Artists list. And it did so without ever surpassing No. 3 on the weekly chart.

Why “Savior”? What about this song that not only makes it the greatest Rise Against song ever on a Billboard chart but also a track only surpassed by Muse’s “Uprising” in terms of overall performance in the chart’s 30-year history? Why not “Re-Education (Through Labor)”, the first single of 2008 Call to reason, released two singles before “Sauveur”? Or “Help Is On the Way,” the first track played on radio after “Savior,” which peaked at number two in April 2011?

Make no mistake: longevity is a key factor. At BillboardOn airplay and hybrid charts (such as Alternative Songs or the Billboard Hot 100), songs drop one chart because they simply didn’t have enough metrics to stay or because they fell below of a certain threshold after a certain number of weeks (so that the rankings are not clogged by huge hits that stay somewhere between #10 and #30, say, for months). Most songs fade after about 20 weeks, plus or minus a few.

“Saviour” did not do this. It followed the usual trajectory of most singles through early established acts, climbing steadily until reaching No. 3 in its 22nd week – perhaps a long journey to its peak, but nothing unprecedented.

Most songs continue to drop once they reach their peak. “Saviour” did not do this. Other songs overtook it towards the top of the chart and then fell, with new tracks replacing them. Muse’s “Uprising” was replaced at the top of the chart by another Muse single, “Resistance”. The usual cycle of chart top hits continued. But there was “Savior” all the time, hovering anywhere between No. 3 and No. 6 among the most played songs in the country. Stations weren’t dropping the song; Sure, they didn’t necessarily play it more often, but it remained a staple of many of their rotations. , and it continued to hover in this area in the months that followed.

the Billboard the charts dated September 25, 2010 was the last time “Savior” appeared on the alternative songs chart. It was at No. 9; falling below #10 would eventually send him recurring, meaning he would automatically drop out of the board. Despite his age – 65 weeks on the chart at this point – he had actually gained 9% rounds from the previous week. Nonetheless, it disappeared the following week, supplanted by the rises of Kings of Leon’s “Radioactive” and Switchfoot’s “The Sound (John M. Perkins’ Blues)” into the top 10.

Sixty-five weeks. That’s how long “Savior” stayed on Alternative Songs. It wasn’t just a chart record – it was eight weeks longer than any other song. It’s a record that stands to this day, though one song has since come closer: Cold War Kids’ “First,” the No. 7 song on the all-time chart, which spent 64 weeks amid ‘a race that started in April 2015. and ended in July 2016. He never quite won the race, but lord, did he put in a lot of laps.

And that shouldn’t detract from its success in any way, as it’s not a marker of anything other than high accomplishments. As we’ve seen with other songs over the years that go on incredibly long runs on Billboard in the charts, even after the efforts of radio promoters and labels to get the song to the top of the charts have dried up, people must still want to hear the song (whether by streaming it or asking for it on the radio ), and on the radio before, programmers have to have a reason to keep playing it.

This is where “Swing Life Away” comes back. He showed that Rise Against could be a major player in rock radio if he found the right formula: a good hook and immediately relatable lyrics. And while the band created plenty of firsts in the years that followed, a defining aspect of “Savior” is that it’s not political, it’s not angry. It’s a relationship – in this case maybe a romantic relationship, but applying something platonic to it isn’t too much of a stretch.

“That’s when she said, ‘I don’t hate you boy / I just wanna save you while there’s still something left to save,’ the chorus begins. “That’s when I told her “I love you girl / But I’m not the answer to the questions you still have. ‘t hate you” which recurs on the bridge and the outro. And despite the use of first person pronouns, the emotion is universal enough to avoid specificity that might prevent it from being relatable – much like, again, “Swing Life Away”.

Then there is the music. “Savior” is not the kind of song you forget even after a few listens; Frontman Tim McIlrath’s voice on a regularly selected electric guitar is instantly recognizable and grabs attention from the start. After 20 seconds, the rest of the band join in, sending the track on its swirling, frenetic beat, only pausing in the seconds before the chorus and on the bridge. Impressive electric guitar and bass work from McIlrath, new guitarist Zach Blair and bassist Joe Principe abound (the electric guitar slides are particularly enjoyable), and Brandon Barnes keeps a feverish punk beat throughout. Easily screamable melodic backing vocals over the chorus deliver what is already an earworm of a chorus.

Also keep in mind that “Savior” was the last single from Call to reason. It ended up being important because there was no single to replace it. A first single from an album can be as huge as they want, but ultimately a band needs to work on their radio following as well. When this happens, radio programmers will often reduce the rotation count of the previous single to avoid overloading one act on its airwaves. “Savior” was the album’s third single, and a fourth was not picked up, meaning the song could go much longer without a shiny new single from Rise Against to take its place.

So “Savior” had a lot of work for it. But consider this, if you still need convincing: even once “Savior” finally fell off the alternative songs, it wasn’t like it just left. The song went on to spend 19 weeks at No. 1 (well, a No. 1!) on the Alternative Songs Recurrents chart, whose tracks play for songs no longer on the main chart. It continued to remain on this chart for another year, eventually falling below its 20 position threshold after the September 24, 2011 listing. It is still part of the libraries of many alternative stations, at least those that still favor music on the guitar. In the last week of radio tracking, it received just over 200 spins from the more than 60 alternative radio stations monitored by Nielsen Music, which would be almost enough to put it on the alternative songs chart right now. it was a new song.

Will Rise Against ever write another “Saviour”? Doubtful, and maybe the band doesn’t even want to. At this point, the quartet has five Billboard 200 top 10s to its name and continues to produce music that clearly connects; “The Violence”, the lead single from his latest album, 2017’s Wolves, peaked at No. 2 on Mainstream Rock Songs and No. 15 on Alternative Songs. Nothing since can claim to be as catchy as “Savior,” nor has anything hit the mix of melody and hard rock that bands like Foo Fighters somehow continue to produce.

But with “Savior”, at least, Rise Against marks the immortality of Alternative Songs. Hell, it took the graph so long to get rid of it, maybe that’s the definition of the word.